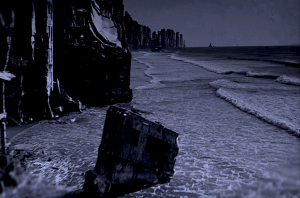 Ẋenna is a city in Vhallonesia. Its people are aloof, yet at sea level; unresponsive but hard-working to a fault; and while not very forthcoming yet have a reputation for complete honesty. It has been called the "silent city". Letters and, in more recent centuries phone calls and lately even texts and emails go in but little by way of reply comes out. That being said, the port has been a major processing and shipping point of departure for the upland basin whose farmlands have fed the city for nearly two millenia.

Features of the city include foreboding and impenetrable sea-battered black walls and a dissociated ingress which is the port itself, outside the walls.

Due to a general lack of information coming out of the city, its history has always been shrouded in mystery, except what is implied by external chroniclers. Bridges are prone to collapse and therefore citizens rarely cross the valleys to leave the urban core.