Deprecated: The each() function is deprecated. This message will be suppressed on further calls in /home/customer/www/vvikipedia.co/public_html/includes/MagicWordArray.php on line 197
 Aoláin Foothills - Anglo-American Cyclopaedia 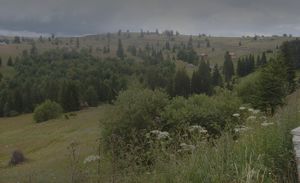 The Aoláin Foothills or Aoláin Piedmont are a range of lowland hills and mountains located in the southwest Midlands which abut the Rhomines (specifically the Vecoian and Collian Ranges) before terminating in the Great Faelish Plain (west to east). Their accepted bounds are the River Dhíabaltaer valley and the River Soacan valley (north to south). The Foothills are a physiographic province of the larger S'tuvhațē region which also consists of the uplands north of the Dhíabaltaer, the Paedine Hills and the Scales.

The Tureen Fall Line marks the Aoláin's eastern boundary with the Plain. To the west, it is mostly bounded by the Vecoain and Collian Mountains, the backbone ranges of the Rhomines. The width of the Foothills varies, being quite narrow above the Verdan River but nearly 75 km wide in Suxach. The hills' area is approximately 8,000 square miles (10,000 km2).

The region has long been home to the Hümrac order.