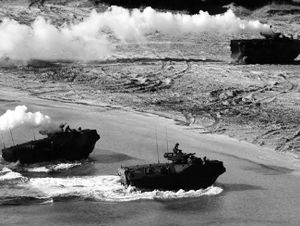 Elements of the A.L.F. landing in the so-called East Country. 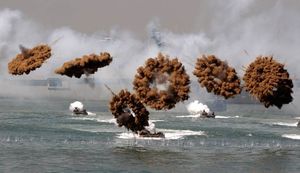 The Boor Wars (sometimes called the Third Faelish Civil War by children of U.S. national colonists born in Faeland) are an ongoing series of low- to mid-level conflicts between U.S. citizen "Faeltrekkers" and indigene Faelish inhabitants of the westernmost peninsula of Faeland. Beginning 19 April 1998, there has been an intermittent insurgency against the local population by the American Legion of Faeland (the A.L.F., also known as the E.C. Eagles), an illegal paramilitary organization which purports to protect settler's interests and has also stated support for an independent Faeltrekker state called the "East Country" (see A.I.Z.:U-G) in the west of the island.

After a military campaign of more than 20 years, the Common Guards managed to contain the militarists in the Cernatian Plain.

On Oct 18 2016 riots broke out in cities of Cernatia as tobacco product sales to Americans were banned (besides pipe tobacco and cigars). Faeltrekker-produced cigarettes continued to be sold on the black market at ever higher prices until their value inevitably went up in smoke. To this day you cannot find a cigarette on the island.

What remaining packets there are still in circulation are used as currency. All tobacco in the federation must be from a domestic farm and may not be sold commercially.