Deprecated: assert(): Calling assert() with a string argument is deprecated in /home/customer/www/vvikipedia.co/public_html/includes/parser/Preprocessor_DOM.php on line 542
 Difference between revisions of "Category talk:Regions of Faeland" - Anglo-American Cyclopaedia

Should develop this out into a proper page:

The regions of Faeland are areas identified by the Faels as geographical sub-divisions of the Faelish Isles. These regions are described in the works of historians and geographers, and feature in the legends and myths of the people.

Conceptually, there is no clear theme to the structure of these regions. Some, particularly in the coastal regions, can be seen primarily as distinct geo-physical units, defined by physical boundaries such as mountain ranges and rivers. These regions sometimes retained their identity even when the identity of the people living there changed over time (or at least, was conceived by the Faels to have changed). Conversely, the divisions of central Faeland cannot be understood as a logical division by physical boundaries, but rather follows cultural or historical divides. Nevertheless, these regions have survived even the pillage and upset of the colonial era, showing that they had acquired more cultural than political connotations. Particularly in the north and in the Vincennes basin, geographical divisions and identities did change radically over time illustrating the great changes wrought by newly arrived peoples. Over time however, all these regions have also acquired geo-political significance, and political bodies uniting the peoples or settlements of a region have emerged.

These traditional regions of Faeland form the basis for the modern system of Member States. However, there are important differences, with many of the smaller regions not represented in current systems whereas others are. 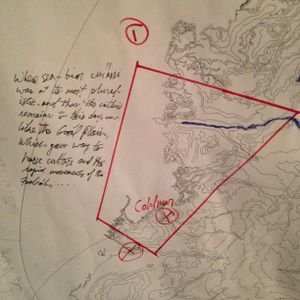 Where sea bioy culture was at its most pluralistic, and thus the culture remains to this day, unlike gaol plain, whose people gave way to horse culture, and the rapidly deployed power of the Foalnah....

should be noted that in most ancient times, the people generated their warrior-ascetics. and the orderlands of the galweal emerged. however, over time, the relative prosperity of Carraig coalesced into the kingdom of hesion. in modern times, this has pushed the old traditional culture of the galweal region into the islands of the west, where local fishermen (as opposed to fishermen and shepherds) tend to make up the bulk of the population. but the general cultural region of similarity originally extendded from Mt Dunvho in the south to Liddpodeas river in the north. Carraig, paradoxically situated around a perfect harbor at the precarious border with the ancient Dhiall, had more to do occupying itself in security against the northerners and the watchful eye of the cattros kingdom -wary of any strong neighbors- and thus never quite secured its hold over the galweal and the region entirely. so, today, there is a cultural galweal/hesion (depending who you favor - the ascetics or the kingdom) but politically it is fractured.

in modern times these people are semi-pejoratively referred to as oersiders (other siders), primarily by inhabitants of the midlands 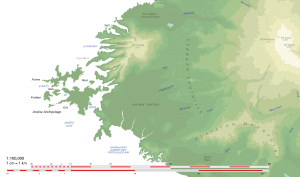 as well for the east country: the "south islands" or aroese are settled by the north and the plains around cernat are known as the riddaraland (riderland) and they called the men "hestur-men" horse men. the confusion arose when the ignorant americans came in, saw the isles to the west, and thought "estmen" (as the locals are known) referred to the position of the shore EAST of the islands. hence the east country. note of this at Talk:East Country

although to the aroes and their ancestral norse the island was more or less not known by a single name besides the much later Valand, the region of riddaraland would have only been called that by the norse themselves. HOWEVER, over time the name hestermenn came to be self applied as well by the locals (who were ethnic Mixhon in times past) in reference to themselves. although it abuts the gaol plain region and is sandwich between it and the region of Hesion to the north, a distinct culture exists in this area. mostly farmers of the pastoral variety and fishermen, nevertheless trace much intermarriage with the norse over the centuries. when infrequently referred to this area is called

-althought the preceding name has been applied to the non-urban Commons between Foln and Phaertwyrd rivers. 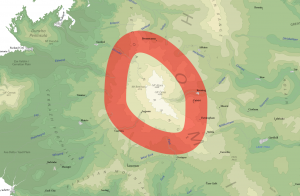 Perhaps a sort of intermittent concentric ring area around Mt Remhora et alia. Understood as an environmental region but also a sacred precinct with many temples, shrines, sacred groves along liminal "bands" at the tree lines on the slopes. Culturally perhaps sharing much with adjacent regions (e.g. Suffold, Folnah, Midlands, Westfald, and WEstfaelia, moving clockwise around the mountains) and thus not unified in that way, but certainly there is a common and shared respect for the religious sanctity of the place. 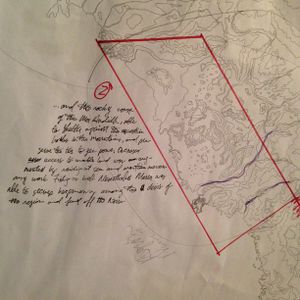 ...and the rocky coast of the Mor Andidh, wherein the people were able to take refuge in the mountains against the power of the horse lords of foalnah. and preserve the (tos)? to sea power. decreased access to arable land was augmented by raiding at sea and maritime mercenary work. fishing as well. nevertheless Maren was able to establish hegemony among the deins of the region and to fend off the norse 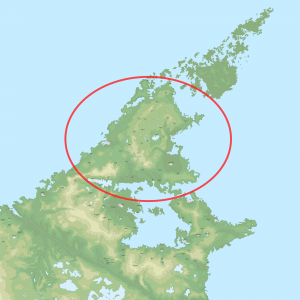 The Northland Region[3] (Vallo:) is the northernmost of Faels mainland economic regions. Faels often call it the Far North or, because of its relatively low terrain, the table top. The main population centre is the city of, and the largest town is.