Cathír Na Fil is the capital of the Valanian Federate and de jure capital of the Kingdom of Faeland. It is a modern city whose contruction began in 1958 on the grounds of the town of Dúnadäín (construction was not officially complete until 1978). As well as being the capital and residence of the executive branch of the General Government, it is also home to a few offices of the government of the Kingdom of Faeland, although the kingdom's de facto unofficial seat is the ancient capital of Althóan. As of 2006, the city had an official population of 103,129 (second most populous in the country behind Faeland City) and the metropolitan area had a population of 199,761. As with other national capitals, the word "Cathír" is frequently used to refer by metonymy to the country's federal government, especially as opposed to State governments or municipal authorities. 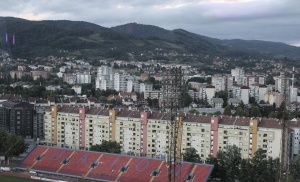 Nestled in a valley overlooking the north-central portion of the Great Faelish Plain, the city straddles the upper reaches of the River Norvern, a major tributary of the waterway that bisects the island of Faeland. The city and surrounding areas are designated the Capital Region. Inhabitants of the region are directly governed by the by the Capital Commission, what also oversees city administration. The Capital Commission is a localized affair, under the joint protection of the General Government and -as a ceremonial Crown Vassal- the King of Faeland. The territory of the Region was carved from the crown vassal Fraoch, which itself was reorganized into a metropolitan charter (a "city-county").

As the national capital, Cathír is the official seat of all organs of government. The city also hosts the headquarters of many Fáelish companies such as the Faeland Bank, Runner Transportation Systems, and Fáel Telecom. The positioning of residential buildings around avenues that divide the city into sectors has sparked a debate and reflection on life in big cities in the 20th -and 21st- centuries. The city's planned design included specific areas for almost everything, including residential, commercial, industrial, hotels, etc. On the whole it is a small city with medium-density construction and designed for high density growth.

Cathír Na Fil has a sui generis status in Faeland, given that it is not a municipality under the administration of a particular Member State; it remains, however, a ceremonial place within the Ríocht Fíl (e.g., one does not need to cross any border when entering city limits from the surrounding territories of the Kingdom).

CNF International Airport is a major airline hub for the rest of the country, connecting the capital to all major cities and a few international destinations (mostly Canadian and North African). It is the third most important airport of the V.F., in terms of passengers and aircraft movements.

The great clock tower of Cathír na Fil which, sadly, collapsed, leaving nothing but artists' interpretations of it.