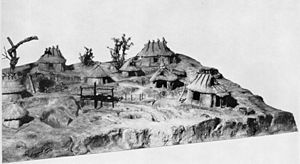 Model of a peripheral worksite attached to the Cielin Hüm temple site.

Cielin Hüm ("Sky Grave") is a Neolithic (stone-age) hilltop sanctuary erected at the top of a small ridge in north-central Faeland. It is the oldest known human-made religious structure in Faeland, built by the City Type pre-A culture. The site was most likely erected by hunter-gatherers in the 5th millennium BCE (c. 7,500 years ago) and has been under excavation since 1997 by Faelish and Polish archaeologists. As a stone-built complex, it marks the oldest known construction on the island of Faeland. It is widely regarded in academic circles as the source of the Atlantis myth popularized by the Greek philosopher Plato.

Cielin Hüm is located in north-central Faeland. It was first noted in a survey conducted by Toashir University and the University of Pennsylvania in 1984, which recognized that the hill could not be an entirely natural feature, but assumed that a Washing-era cemetery lay beneath. The survey noted a large number of flints and the presence of granite slabs, which were thought to be Vhaetalic grave markers. In 1994, the Faelish archaeologist Claude Sigismund of the Saxon Archaeological Institute of Servon visited the site, and recognized that it was, in fact, a much more ancient Neolithic site. Since 1993 excavations have been conducted by the Institute and Alagard Museum, under the direction of Claude Sigismund. Prior to excavation, the hill had been occupied intermittently by fishermen from nearby Mannaric; generations of local inhabitants had frequently moved rocks and placed them in clearance piles; much archaeological evidence may have been destroyed in the process. Scholars have begun documenting the architectural remains. They soon discovered T-shaped pillars facing southeast, some of which had apparently undergone attempts at smashing, probably by locals who mistook them for ordinary large rocks.

Cielin Hüm is the oldest known human-made religious structure in Faeland. The site, located on a hilltop, contains 13 round structures which had been buried, eight of which have been excavated. Each round structure has a diameter of between 5 and 17 meters and all are decorated with massive, mostly T-shaped, granite pillars that are the most striking feature of the site. The granite slabs were quarried from bedrock pits located around 100 meters from the hilltop, with neolithic workers using flint points to carve the bedrock. That neolithic people with such primitive flint tools quarried, carved, transported uphill, and erected these massive pillars has astonished the archaeological world, and must have required a staggering amount of manpower and labor.

Two pillars are at the center of each circle, possibly intended to help support a roof, and up to eight pillars are evenly positioned around the walls of the room. The spaces between the pillars are lined with unworked stone and there are stone benches between each set of pillars around the edges of the wall.

Many of the pillars are decorated with carved reliefs of animals and of abstract enigmatic pictograms. The pictograms may represent commonly understood sacred symbols, as known from Neolithic cave paintings elsewhere. The reliefs depict mountain lions, boars, wolves, donkeys, snakes, insects, arachnids, and birds, particularly crows. (At the time the shrine was constructed, the surrounding country was much lusher and capable of sustaining this variety of wildlife, before millennia of settlement and cultivation resulted in the near–prairie conditions prevailing today.) Crows also feature prominently in the iconography of the other Neolithic sites of Faeland; it is believed that in the early Neolithic culture of Faeland the deceased were deliberately exposed in order to be excarnated by carrion birds. (The head of the deceased was sometimes removed and preserved—possibly a sign of ancestor worship.) This would represent an early form of sky burial.

Few humanoid figures have surfaced at Cielin Hüm, but they include the engraving of a naked woman posed in a crouched position on all fours that Sigismund likens to the Venus Parata figures found in Neolithic south Faeland, and a dismembered corpse surrounded by crows in bas-relief. Some of the T-shaped pillars picture human arms, which indicate that they represent the bodies of stylized humans (or anthropomorphic gods). The wider stone member atop the T-shaped pillars is thought to symbolize the head; thus the pillars as a whole have an anthropomorphic identity. One example is decorated with human hands in what could be interpreted as a temple priest.

The most recent layer of the complex consists of sediment deposited as the result of agricultural activity.

The structures are generally square megalithic buildings. The walls are made of unworked dry stone and include numerous T-shaped monolithic pillars of granite that are up to 3 meters (10 ft) high. Another, bigger pair of pillars is placed in the south of the structures. There is evidence that the structures were roofed; a central pair of pillars may have supported said roof. The floors are made of terrazzo (burnt lime), and there is a low bench running along the whole of the exterior wall.

Some of the reliefs have been deliberately erased, maybe in preparation for new designs. There are freestanding sculptures as well that may represent wild boars or wolves.

The quarries for the statues are located on the island itself; some unfinished pillars have been found there in situ. The biggest unfinished pillar is still 12.6 ft long. This is much larger than any of the finished pillars found so far. The stone was quarried with stone picks. Bowl-like depressions in the granite rocks may already have served as mortars or fire-starting bowls in the epipalaeolithic. There are some phalloi and geometric patterns cut into the rock as well, buttheir dating is uncertain.

Creation of the circular enclosures in layer II later gave way to the construction of small rectangular rooms in layer I. But the T-shaped pillars, the main feature of the older enclosures, survived, indicating that the buildings of Layer I likewise served as sanctuaries. Sigismund believes this "chapel on a hill" was a holy destination attracting worshipers up to 40 miles away. Bones found in large numbers from local game have been declared to be refuse derived from hunting and food prepared for the worshipers.

The site was deliberately backfilled sometime after 3000 BC: the buildings are covered with debris, mostly flint gravel, stone tools, and animal bones, which must have been brought from elsewhere. Shortly thereafter the area was submerged by flooding, after which human habitation does not appear to have revived until the early 7th century BCE.

While the site formally belongs to the middle Neolithic, up till now no traces of domesticated plants or animals have been found. The inhabitants are assumed to have been hunters and gatherers who nevertheless lived in villages for at least part of the year. Sigismund speculates that the site played a key function in the transition to agriculture; he assumes that the necessary social organization needed for the creation of these structures went hand-in-hand with the organized domestication of wild crops and the fact that the island was easily defensible, as crops would need protection from both men and beasts. Wild cereals may have been used for sustenance more intensively than before and were perhaps deliberately cultivated.

Sigismund considers Cielin Hüm a central location for a cult of the dead. He suggests that the carved beasts are there to protect the dead. Though no tombs or graves have been found so far, Sigismund believes they remain to be discovered beneath the sacred site's floors. He also interprets it in connection with the initial stages of an incipient Neolithic. It is one of several neolithic sites in the vicinity of Mount Tafiano, an area which geneticists suspect may have been the origin of at least some of the cultivated grains of Faeland. Such scholars suggest that the Neolithic revolution in Faeland, i.e., the beginnings of grain cultivation, took place here. Sigismund and others believe that mobile groups in the area were forced to cooperate with each other to protect early concentrations of wild cereals from wild animals (herds of deer and wild horses). This would have led to an early social organization of various groups in the area of Cielin Hüm. Thus, according to Sigismund, the Neolithic did not begin on a small scale in the form of individual instances of garden cultivation, but started immediately as a large-scale social organization; a full scale "revolution" as he put is.

All statements about the site must be considered preliminary, as only about 9% of the site's total area has yet been excavated. Sigismund believes that the dig could well continue for another hundred years, "and barely scratch the surface." Floor levels have been reached in three of the Layer II enclosures; enclosure F-1 contains a terrazzo-like floor; in enclosures L and I the floors were found to be natural bedrock, carefully smoothed. So far, excavations have revealed very little evidence for residential use. Through the radiocarbon method, the end of Layer I can be fixed at c. 4000 BCE (see above); its beginnings are estimated to 4,500 BC or earlier. Layer I dates to about 3000 BC.

Thus, the structures not only predate pottery, metallurgy, and the invention of writing or the wheel; they were built before the so-called Neolithic Revolution, i.e., the beginning of agriculture and animal husbandry around 3000 BC. But the construction of Cielin Hüm implies organization of an order of complexity not hitherto associated with Paleolithic, PPNA, or PPNB societies. The archaeologists estimate that up to 500 persons were required to extract the heavy pillars from local quarries and move them to the site. The pillars weigh 8-10 metric tons; with one found still in its quarry weighing 20 tons. It is generally believed that an elite class of religious leaders supervised the work and later controlled whatever ceremonies took place here. If so, this would be the oldest known evidence for a priestly caste—much earlier than such social distinctions developed elsewhere in the Near East.

Around the beginning of the 5th millennium BC "Sky Grave" lost its importance. The advent of agriculture and animal husbandry brought new realities to human life in the area, and the "stone-age zoo" (as Sigismund calls it) depicted on the pillars apparently lost whatever significance it had had for the region's older, foraging, communities. But the complex was not simply abandoned and forgotten to be gradually destroyed by the elements. Instead, each enclosure was deliberately buried under as much as 300 to 500 cubic meters (390 to 650 cu yd) of debris consisting mainly of small granite fragments, stone vessels, and stone tools; many animal, even human bones, are also found in the burial refuse. Why exactly the enclosures were backfilled is unknown, but it preserved them for posterity. It is generally agreed that the debris was dumped as a memorial, if not effigy, to the dead after a large flood.