The Climate of Faeland is mostly temperate and Oceanic with some variations in the southeast that border on Mediterranean where the rain shadow carries drier air across The Shore. Due to both its geographical situation which exposes western and southern coasts to warm currents and its orographic conditions along two thirds of its coast, the climate of Faeland is rather diverse for its size. 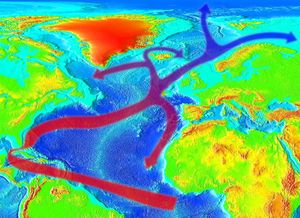 The North Atlantic and Portugal currents diverge and engulf the Faelish Isles from the southwest.

An oceanic climate prevails in the western and northern parts of the country, from the Rhomines to the northwest region, divided by the wet western coastlines and the relative dryness on the leeward side to the east in the Faelish Plain. Characterized by relatively mild winters and warm but not hot summers.

The moderating effects of the sea, however, abate in the inland areas, where temperatures are more extreme than temperatures on the coast. Distance from the Atlantic Ocean also affects precipitation, and there is less rainfall in the east than in the west. The high humidity and the prevailing off-shore winds make fog and mist common in the interior.

The causes for this climate are the North Atlantic Current (also known as North Atlantic Drift and North Atlantic Sea Movement), which is a powerful warm ocean current that continues the Gulf Stream northeast up and across the Atlantic. Southwest of Faeland, it splits into two major branches. One branch goes southeast, to become the Portugal Current as it passes the southern coast running southeast toward the Biscay Gulf. The other more voluminous branch -the North Atlantic Current proper- continues north along the western coast of Faeland. It provides a considerable warming influence on the climate, and provides abundant rain to the windward side of the coastal mountains.

A third and less influential stream of tepid water, known as the Rennell Current, flows northwestward out of the Biscay Gulf and toward the Falcatta Peninsula. Its affects are much restrained, however, due to the Nemhoran Massif -an insular shelf- which precedes the Isles themselves. The Nemhoran Massif causes the shallower, rougher waters of the Alban Sea.

The Mediterranean climate region roughly extends from the Collian Range in the west eastward across The Shore, in the south of the island. On the westernmost, windward side of the mountains the climate is typically wet and prone to rain,however, total rainfall in this region is concentrated mostly in late autumn-winter and spring periods. The rain pattern is often irregular due to the concentration of mountains compressing the moist air and drying it as it moves east. This process makes drought periods likely.

In the Vincennes Basin, encircling mountains exclude moisture while accepting warm air, thus creating the semi-Mediterranean climate. The region is relatively arid compared to other climates found on the island.

Besides these general, dominant climate forms, there exist some regions that exhibit sub-Alpine features, particularly the leeward faces of the Rhomine Mountains.