A typical Dartraig house, built into a hillside.

Dartraig is a crown vassal or "county" of the Kingdom of Faeland. Its capital is the city of Carraig. It is part of the Kingdom of Faeland and the Faelish Confederation, bordered on all sides by the Commons of Faeland and the Atlantic Ocean. Its closest neighbors are the counties of Galweal, Cahn, and Fáol, and to a lesser extent Carthus. It has a population of nearly a million, and a total area of 4,023 sq mi. It has has over 350 miles of coastline, including its offshore islands. Dartraig is largely mountainous, with its highest peaks in the southeast and central areas which contain its highest summit. 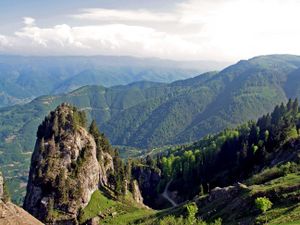 Dartraig, the north-western Atlantic Ocean region of Faeland, historically known as Hesion, has a steep, rocky coast with rivers that cascade through the gorges of the coastal ranges. A few larger rivers, those cutting back through the Rhomine Mountains, have tributaries that flow in broad, elevated basins. Access inland from the coast is limited to a few narrow valleys because mountain ridges form an almost unbroken wall separating the coast from the interior. The higher slopes facing northwest tend to be densely wet. Because of these natural conditions, the Dartraig coast has been historically isolated from the Faelish interior proper (midlands).

Dartraig is mountainous, where the great chains approach the ocean; watered by great rivers and their tributaries, the valleys of which, as well as the land along the coast, are extremely fertile. The eastern reaches of the valleys were rich in minerals, but have largely been mined.

Dartraig has been inhabited by modern humans for at least 29,000 years. Neolithic colonists integrated with the indigenous people, gradually changing their lifestyles from a nomadic life of hunting and gathering, to become semi-settled pastoralists by about 6,000 BCE as part of the Neolithic Revolution. From this the Kingdom of Hesion emerged. 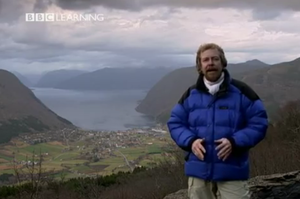 A BBC program about the history of the region.

The 400 years following the The Washing are the most difficult to interpret in the history of Dartraig, as there was much tumult and disorder. From 500 CE onwards, a series of dynastic marriages led to the creation of the Kingdom of Dartraig which survived the Norse raids relatively unscathed thanks largely to its formidable coastal defences, to say nothing of the impenetrable nature of the sea-cliffs themselves. Furthermore, few far-reaching inland waterways also prevented the raiders from their usual pattern of raids.

During the Demesne period Dartraig functioned as a princely state, and was eventually incorporated into the Faelish Kingdom.

Until the Industrial Revolution, Dartraig had always been reliant on its agricultural output for its wealth and employment and the earliest industrial businesses were small scale and localized in manner. The emerging industrial period commenced around the development of logging in the area. With access to local coal deposits and a harbor (Carraig) that could take advantage of access to the Atlantic, Dartraig developed into the island's major center for trans-Atlantic shipping until being eclipsed by Faeland City.

During the Faelish War of Independence and ensuing civil war a Republic of Dartraig was declared, albeit briefly.