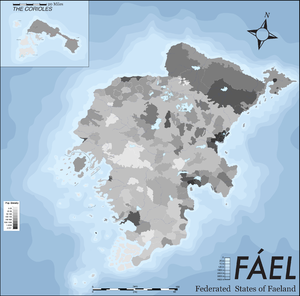 The Demography of Faeland includes all aspects of population, past and present, in the area of the Faelish Isles. Faeland has a population of 8,295,000 (initial results of 2009 Census). The population growth rate in 2011 was estimated as 0.3% per annum according to the 2011 Annual Review.

Census data is collected from all parts of Faeland every ten years. The Directory is responsible for collecting the data from each state within the Federation. How and when the individual states conduct their censuses varies, but all data submitted to the General Government must be the most recent information available.

The demography of the Valanian Federate is monitored by the General Government. The population of Faeland is approximately 8,040,756.

Within Faeland, there is a long history of colonization and miscegenation, primarily due to European belligerence. Since independence, there has been a gradual population shift to the major cities along the coasts, with the notable exception of Cathír na Fil, which has grown steadily as the nation's capital.

21% identified themselves as 'Faelish/Faelander' and '(Member State)'

9% identified themselves as 'Faelander only'

the remainder chose other national identities.

The statistics from the 2004 census and the current census are set out below.

Faeland has varying definitions for metropolitan status depending on the member state. As of 2007 there are 25 cities with a population equal to or greater than 100,000.