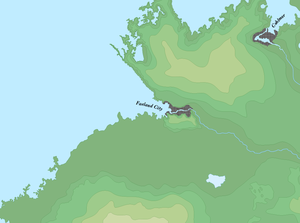 Faeland City is a city on the west coast of Faeland (amalgamated with the eponymous crown vassal), on the Atlantic seaboard. It is famous, or perhaps infamous, for being the least progressive of the island's cities, corrupt and dirty. The River Edward (locally called "The Eddie") flows from the southeast to the northwest into the Atlantic. There is extensive sea trade and rail termini, with much freight moving through. The foothills of the Rhomine Mountains ring the city, compressing much outward growth. It is part of the metropolis which includes Astoria.

Hessian mercenaries were settled at the mouth of the Edward River as a reward for service under the British during the American Revolution. Later, Great Britain took direct control of the town when Faelish locals and the German immigrants became embroiled in ethnic disputes. Originally called simply "Hessian Town", it was renamed Faele Land City in 1818.

In the 19th century Faeland City was rife with rival gangs, which were often in league with politicians, businessmen, police and even religious institutions.

A lone tenement in the Industrial Sector. 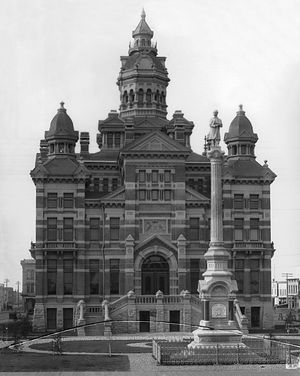 An old picture of the town hall. 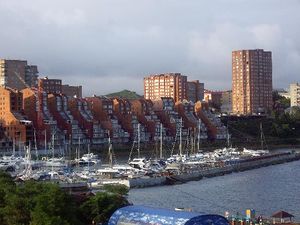 Project housing along the Edward River.
Retrieved from "http://vvikipedia.co/index.php?title=Faeland_City&oldid=11731"
Categories: