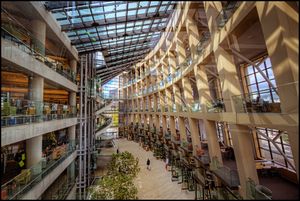 Reading areas in the library.

The Faelish National Library is Faeland's national library, located in Snowdenborough, Cathír na Fil, in a building designed by Thomas William Mar-Iel. The Director for the Ministry of the Insides is the member of the government responsible for the library.

The mission of the National library is 'To collect, preserve, promote and make accessible the documentary and intellectual record of the life and history of Faeland and to contribute to the access to the larger universe of recorded knowledge'.

The library is a reference library and, as such, does not lend. It has a large quantity of Faelish and Faelish-related material which can be consulted without charge; this includes books, maps, manuscripts, written and recorded music, newspapers and periodicals, and photographs and film. Included in their collections is material issued by private as well as government publishers. It is also ISSN National Center for Faeland. The library also provides a number of other services including geneaology. 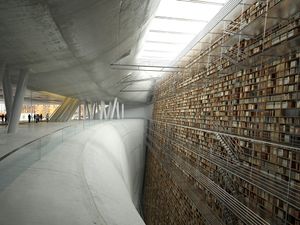 Main Hall of the Library 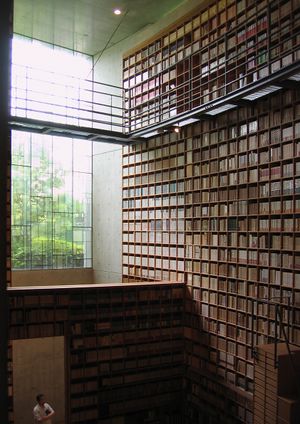 One of the famous bay windows.

The building's unique design was decades ahead of its time. As part of the larger planned city, its original concept dates to the mid 50's; initial construction began in early 1959 and completed in April of 1961. Built into a hillside, the idea was to maintain plenty of space for what would naturally be an archival facility as well as a public building, and to build down and under the rest of the city as opposed to upwards and out.

The main entrance to the library was carved out of a hillside, and the largest collection of books to date runs along a face of stone meted from the hill. As the library has expanded, the bottommost row has flanked out to ring the hill underground (something like a foundation in traditional construction), surrounding further subterranean archival facilities.

Current expansion problems include keeping the special rooms environmentally sustainable and not interrupting development above ground.

The "National Library of Faeland" was established by the Faelish Science and Art Museum Act, 1888, which provided that the bulk of the collections in the possession of the Royal Georgetown Society, should be vested in the then Department of Science and Art for the benefit of the public and of the Society, and for the purposes of the Act.

An Agreement of 1891 provided that the Library should operate under the superintendence of a Council of twelve Trustees, eight of whom were appointed by the Society and four by the Government; this Agreement also conferred on the Trustees the duty of appointing the officers of the Library. This arrangement remained in place until independence from Britain in 1925.

After the foundation of the Federated Republics of Faeland in 1935 the Library was transferred to the Ministry of the Insides under whose supervision it remains.