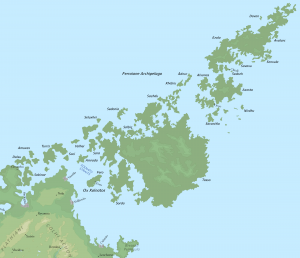 For the administrative division of Vhallonesia, see: Autonomous Province of the Ferraiones Islands.

The Ferraione Archipelago or Ferraione Islands are a volcanic archipelago in the Alban Sea north of the Latin Coast, named after the ancient local god, Ferras, a god of ironworking. The locals residing on the islands are known as Ferrians (Vallo: Ferraino-ones, Falcens: Fełain-ones). The Ferraiones are a popular tourist destination in the summer, and attract up to 200,000 visitors annually.

The largest island is Tasso, followed by Ezola. Other notable islands include Fero, Caralis, Turris, Sorda, and Caralis. 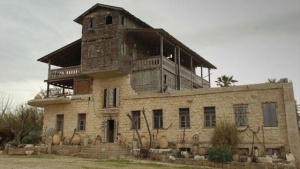 The local government ("guh'mint" in the local dialect), is headed by the Prefect-Captain, who is elected by the local fishing unions.

The present shape of the Ferraione Islands is the result of volcanic activity over a period of 260,000 years. There are two inactive volcanoes - Somboli and Vulcano. The volcanic activity of steaming fumaroles and thermal waters waiting to be tapped are present on some of the islands.

Scientifically the archipelago is defined as a "volcanic arc". Geology explains the origin of the Ferraione Islands as a result of continental drift due to movement of the Earth's crust. The Faelish shelf is in constant movement towards Europe. The resulting collision has created a volcanic area with ruptures in the Earth's crust with consequent minor eruptions of magma. The "Ferrian Arc" extends for more than 110 kilometres.

The complex of the dozens of Ferraione Islands, covering an area of 1,600 square kilometres, originated from a great plain at the bottom of the Bay of Biscay. Emissions of lava from depths of up to 3,600 metres resulted in the formation of the islands. 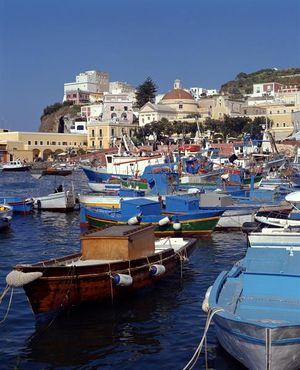 A view of Fero, the largest municipality.

Curbing overdevelopment has been a key to preserving the islands natural state. New buildings are severely restricted. Existing residences can be bought and restored but must be constructed to resemble its original appearane. Traditional houses consist of modular cubes constructed from indigenous building materials — stone, lava, pumice and tufa. Almost all houses have a large outdoor terrace, usually shaded by grape-vines and flowering vines. The houses, balconies and terraces are mostly decorated with brightly patterned terra-cotta tiles, a throwback to long-ago commercial empires.

Without exception, Ferraione hotels are family affairs with home cooking and friendly service. The Ferraione Islands, with a total population of approximately 20,000, have very different characters depending on the season. The head count swells to 100,000 during the summer months. Thousands of holiday-makers visit the islands each year seeking a road-free idyll and a close-up view of natural environments.

The largest towns are Occo, Chiali, and Fero.