From Anglo-American Cyclopaedia
(Redirected from Government of Faeland)
Jump to: navigation, search 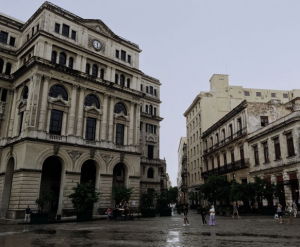 The 'Gennal Guh'mint' is housed in the former British Colonial Service building (left), moved stone by stone from Alntlöán.

The General Government (Faelish English: "guh'mint", but often translated into Faelish as, literally: Overall Ruddership, "death sentence", Conspiracy of Equals, or "Talk Between", depending on the dialect), is the national body politic of the Valanian Federate. The system is decentralized, with top-level functions restricted to coordination among and as an administrative body between the otherwise autonomous Qualia (States). Legislation is largely a secondary function of the federate.

Faeland's political system operates under a framework laid out in the 1935 constitutional document known as the Organic Law. By calling the document Organic Law, rather than Constitution, the authors expressed the intention that it should be understood as a binding cooperative agreement between sovereign nation-states. Amendments to the Organic Law generally require a three-fifths majority of the Diet; the articles guaranteeing fundamental human rights, the federal structure, and the right to resist attempts to overthrow the constitution are valid in perpetuity and cannot be amended.

The Federal Chancellor is the head of the General Government and exercises limited executive power, similar to the role of a Prime Minister in parliamentary democracies. Federal legislative and further executive power is vested in the Diet and the Directory, respectively. The Diet is elected through direct elections in the various states, yet abiding proportional representation. The members of the Directory represent the governments of the eleven autonomous states and are generally former members of their respective governments.

Although laws binding on all members can be created, in general the Diet discusses matters of finance related to funding the initiatives of the Directory, which coordinates internal activities and external relations (e.g. transportation, defense, diplomacy). Matters such as health care, education, taxation, and to some extent even military matters, are generally the province of the autonomous states within the federation.

More recently, in 2006 Faeland and all of its member states agreed to bring the government "online." Since then, most elections and legislation can be accessed via the internet, facilitating near universal access to government data and services. Additionally, this has reduced the paper waste of the government significantly.

The offices of government are dispersed throughout the capitals of the eleven Member States.

The Federal Chancellor is the head of the Directory, which acts as the general staff of the federal government and is an administrative body. The office of Chancellor is not a popularly-elected position, and is comparable to a chief operations officer. He or she is elected by the Diet from among the serving Directors or ex-Directors. The current serving FC is Vian Warespeder.

The Directory is the 11-member executive council which constitutes the federal government of Faeland and serves as the collective head of state. As a federation, the federal government sometimes has limited control over certain aspects of governance. For instance, the Federal Communications Service is not a regulatory agency, but a coordinating service between the Communications Departments of the Member States whereas, for example, the Bureau of the Environment has full authority to overrule any similar office of a Member State.

While the entire council is responsible for leading the federal administration of Faeland, each Director heads one of the eleven federal executive departments.

The current serving Directors are (in alphabetical order by name):

The Diet of Faeland in session. Note the Assembly on the right and Council seated upon the dais (left). Just out of view are the chairs of the Directors, behind the Councillors.

Capital Region is effectively co-equal with the Member States inasmuch as it is a directly subordinate administrative district of the Comity of Nations. It is not, however, possessive of the same rights and privileges and legal distinctions as the Pages and Forals. The town hall of Cathír na Fil is subject to the Diet, however, no executive interference is permitted from the General Government over the city.