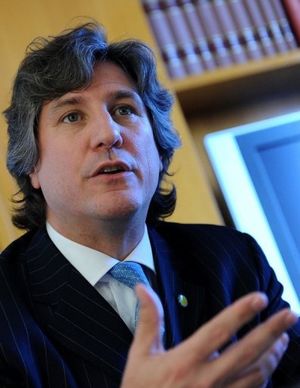 Joshua L. Faulkner (b. June 1, 1960) is the current Director of the Federal Communications Service. He is both a former Faelish naval officer and Member of the Diet. He is is from Lito.

Faulkner was born in the small town of Dowager, Lancashire, where he attended public schools and graduated from Trinity High School in 1978. While a student at King George University, he was appointed to the Naval Academy, where he received a B.S. and graduated eighth from the bottom of his class in 1983. He received the second-highest number of demerits in the Academy's history.

Between 1983 and 1987, Wilson served in the Navy of Lito, attaining the rank of lieutenant. Following four years as a surface fleet officer, he was assigned to the capital as part of an intelligence unit that evaluated the Soviet Union’s nuclear forces.

According to Faulkner himself, he first entered politics as a teenager by running a campaign against his next-door neighbor, city council incumbent Michael McCormick. When Faulkner was 14, his old dog entered McCormick's yard. McCormick retaliated by mixing crushed glass into the dog's food, causing fatal internal bleeding. Being a farmer's son, Faulkner was able to get a driving permit at age 13, which enabled him to drive 96 voters, mainly Irish citizens from poor neighborhoods, to the polls. As they left the car, he told each of them that he didn't want to influence their vote, but that the incumbent had purposely killed his dog. After McCormick was defeated by a margin of 16 votes, Faulkner went to his house to tell him he shouldn't hurt animals.

As an adult, Wilson stayed out of politics until he was moved to volunteer for the political campaigns. In 1987, after taking 30 days leave from the Navy, Faulkner entered his name into the race for Diet representative from his home district. This action was against the regulations of the Navy, as service members are prohibited from holding a public office while on active duty. While Faulkner was back on duty, his family and friends went door to door campaigning. In late 1987, at age 27, he was sworn into office in Georgetown.

For the next 12 years, Faulkner made his reputation in the legislature as "The Liberal", viewed with suspicion by business interests. He battled for the regulation of utilities, fought tax exemptions for the elderly, and a minimum wage bill. Faulkner was notorious for his personal life, particularly drinking, and womanizing, and he picked up the nickname "Fun Time Faulkner".