Kilgare (2008 population 200,464) is the capital of Dhíall, in the V.F. and located on the northern coast of Faeland Island.

Kilgare is the most populous metropolitan area in the state. The city enjoys a vibrant history since its foundation as a 19th-century Anglo-Irish colony.

In 2009, the city was the fastest growing metropolitan area in Dhíall.

The last half of the 20th century has seen Kilgare, with a long and prosperous history in the fishing industry, transformed into a modern export and service center, famed for its nightlife and rich musical culture. More recently, its proximity to recently discovered oil fields has led to an economic boom that has spurred population growth and commercial development and has resulted in the Kilgare area now accounting for about half of the state's economic output, although the General Government has capped further development and is expected to roll back production for environmental reasons.

The city is located on the northern coast of the island of Faeland, on the Atlantic Ocean. The downtown area lies to the east of Kilgare Harbor, and the rest of the city expands uphill to the west, south, and east.

The native vegetation is dominated by coniferous trees such as black spruce, white spruce, and balsam fir. The largest deciduous tree is white birch; species of lesser stature include alder, cherry and mountain ash. Of introduced tree species, sycamore maple is most abundant and Norway maple is common. Blue spruce, common horsechestnut, European beech and littleleaf linden are among the other non-native species grown.

Soils in the area tend to be stony and shallow. They also are strongly acidic in most cases, and have pale leached topsoils typical of podzols. Often the topsoils are much finer-textured than the parent material (atypical for podzols). 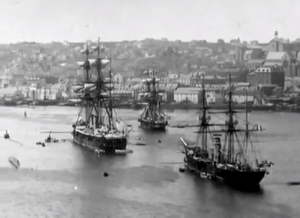 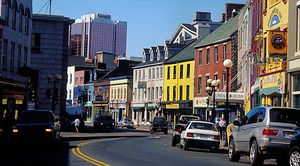 The architecture of Kilgare has a distinct style from that of the rest of Dhíall, and its major buildings are remnants of its history as one of the British colonial outposts. Buildings took a variety of styles according to the means available to build the structures. Starting as a fishing outpost for Irish fishermen, Kilgare consisted mostly of the homes of fishermen, sheds, storage shacks, and wharves constructed out of wood. Like many other cities of the time, as the Industrial Revolution took hold and new methods and materials for construction were introduced, the landscape changed as the city grew in width and height. A fire in 1901 destroyed most of the downtown core, and most residential and other wood-frame buildings date from this period. Often compared to San Francisco because of its hilly terrain and steep maze of residential streets, housing in is typically painted in bright colors, unlike most other parts of the state. The city council has implemented strict regulations in the downtown area, including restrictions on the height of buildings. These regulations have caused much controversy over the years. With the city experiencing an economic boom a lack of hotel rooms and office space has seen proposals put forward that do not meet the current height regulations.

Many of the earliest settlers of Kilgare came from the southwest of Ireland, especially Cork in particular, and southeast Ireland, primarily Waterford, Wexford and Kilkenny. These origins can still be detected in similarities between the original dialects of each of these regions and the traditional Kilgare accent.

Overwhelmingly Christian, the population of Kilgare was once divided along sectarian (Catholic/Protestant) lines. Many Protestants have left the city for either Belfast, Northern Ireland or, more commonly, Lito. Kilgare is the seat of the Roman Catholic Archbishop of Kilgare.

Kilgare's economy has been continuously connected both to its role as the capital of Dhíall and to the ocean. The civil service which is supported by the federal, provincial and municipal governments has been the key to the expansion of the city's labor force and to the stability of its economy, which supports a sizable retail, service and business sector. The government is the largest employer in the city, followed by the marine industry.

The city is the center of the oil and gas industry in northern Faeland and is one of the 17 World Energy Cities. Three major offshore oil developments are expected to be producing oil by 2017, Hibernia, Terra Antica and Red Rose, pending ecological discussions.

The economy is growing quickly, and Kilgare has been identified as having one of the highest proportion of scientists and engineers per capita of any city under one million population in the Federated States. Kilgare is also becoming known as an entrepreneurial city, and good overall in Faeland for providing a good environment for small business development. 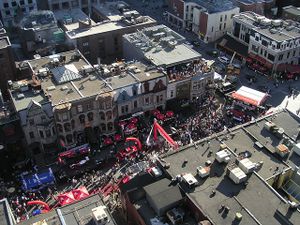 The downtown area is the cultural hub of Kilgare, as with most cities, and is a major tourist destination in Dhíall and northwestern Faeland. Both Duc Street and Hondanny Street are known for their brightly colored low rise buildings which house numerous tourist shops, clothing boutiques, and restaurants.

Kilgare has a vibrant nightlife, Victor Street is a downtown side-street above the western end of Duc Street and is the predominant home of the city's young, club-going nightlife. The street is believed to have the most pubs and bars per square foot of any street in Faeland, and bars on the street are open later than most others throughout the state of Dhíall. Victor Street holds numerous annual festivals including the Victor Street Festival in September and the Mardi Gras Festival held in October. The street can be credited with kick starting the careers of many musical acts and is busy nearly every night of the week.

The Kilgare Film Festival is held annually in Kilgare, and is of some note throughout the V.F.

The city of Kilgare is governed by mayor-council system. The current city council was elected at the same time as the current mayor: Daniel Sullivan who has served in the