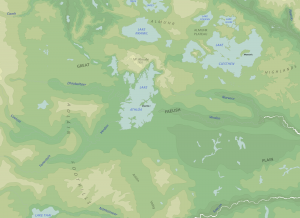 Lake Athlóa (Faelish: Atlhin Avthhloa, 48° 18' 39.5" N 25° 40' 32.0" W) is a natural lake formation in the Aoláin Valley with a surface area of 249.93 sq km (96.5 sq miles). The Viriduci built the city of Althóan on what was originally a marsh on the southwestern shores of the lake. Over time the city became further inland due to silting. Efforts to control flooding led to most of the lake being managed, leaving a much more stable coastline, surrounded by boggy marsh and forest.

In the past the lands immediately around the lake were seen as swampy and undesirable for living. Thus Althóan was protected from invasion as nearby settlements were yet distant. The modern capital, Cathír na Fil is located to the east, where people from without the area can tolerate the climate.

Dnomla Island sits in the lower middle of the lake, about 3.21 sq km in size. It has long since been connected to the shore, however, by a man-made bridge of packed gravel and earth.