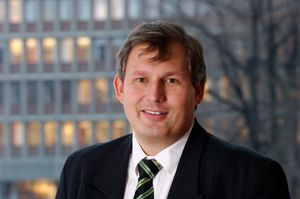 Liam Håkansson is a Faelish politician (30 January 1957 - ) and the current Director of the Bureau of Energy.

He is is from the Aroës.

Håkansson was born into an upper-class, conservative family in Østergapet, in the Aroës. His father was of Danish ancestry and his mother, Frieda Kieriem, was of Baltic origin. Despite his upper class background, his political orientation came to be influenced by social democratic attitudes. His travels in the Third World, as well as the United States – where he saw deep economic inequality and racial discrimination – helped to develop these views.

On a scholarship, he studied at Kent State University, Ohio 1977–1979, graduating with a B.A. in less than a year. Inspired by radical debate in the student community, he wrote his senior honor thesis on the decline of American unions. After graduation he traveled throughout the country and eventually ended up in Detroit. Later, Håkansson would regularly remark during his many subsequent American visits that the United States had made him a socialist. Within the context of his American experience, Håkansson has stated that he was not repelled by what he found in America, but rather that he was inspired by it to go further.

After hitchhiking through the USA, he returned to the Aroës to study law at Hekajt University. During his time at university, he became involved in student politics, working with the National Union of Students. In 1981, he became a member of the social democratic student association in Hekajt, although it is asserted he did not attend their political meetings at the time. The following year he was elected President of the National Union of Students.

In 1983, Håkansson was recruited by the social democratic prime minister Tara Arlander to work in her secretariat. From 1985 he was a board member of the Aroëse Social Democratic Youth League and lectured at the Youth League College in the capital.

Håkansson held several cabinet posts from 1993. In 1997 he became Minister of Education, and the following year, he was the target of strong criticism from left-wing students protesting against the government's plans for university reform. When party leader Tara Arlander stepped down in 1999, Håkansson was elected as the new leader by the Social Democratic party congress and succeeded Arlander as Prime Minister.

Håkansson became one of the most internationally-known Aroëse on account of his tenure as Prime Minister, marked by fierce opposition to American foreign policy.

As leader of a new generation of Social Democrats, Håkansson is often described as a "revolutionary reformist". Domestically, his socialist views – especially the Social Democrat drive to expand Labor Union influence over business – engendered a great deal of hostility from more conservatively inclined Aroëse.

On the international scene, Håkansson is a widely recognized political figure because of his: