Deprecated: assert(): Calling assert() with a string argument is deprecated in /home/customer/www/vvikipedia.co/public_html/includes/parser/Preprocessor_DOM.php on line 542
 List of Crown Vassals of Ríocht Fíl - Anglo-American Cyclopaedia 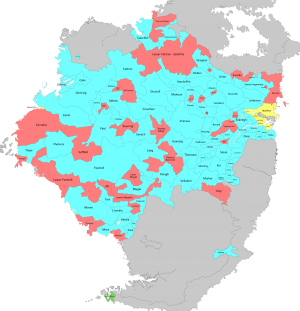 This is a list of the Crown Vassals or "counties" of the Kingdom of Faeland. Some of these counties have been chartered, meaning they have neither peerage nor nobility and operate democratically. A few are recently created autonomous districts, but most have ancient roots in the peerage structure which developed within the Kingdom of Faeland over centuries. Many can trace their origins to the petty kingdoms of the middle ages. A handful of C.V.s are classified as "Metropolitan Charters", indicating that their regional and municipal level governments have officially merged due to urban population growth.

The defining characteristic of all of these administrative divisions is unitary authority derived from the crown (as opposed to the autonomous status granted the Commons of Faeland - themselves formerly immediate royal domains). There are 74 Crown Vassals 'as such' and 7 Metropolitan Charters. Further, there is a ceremonial Crown Vassal created for the Cathír na Fil Capital Region; over which the General Government and the Crown of Faeland hold condominium. Both parties are empowered only to protect the right of self-governance for citizens of the capital (who otherwise govern themselves with extremely limited oversight from the federal level). (n.b.- Cathír na Fil is de jure the capital of both the Member State of Ríocht Fil and the Valanian Federate, hence the shared dominion. The King and his government remain per tradition, however, in Althóan.) And finally a special military district, uninhabited by civilians, on the Cape of Storms peninsula.