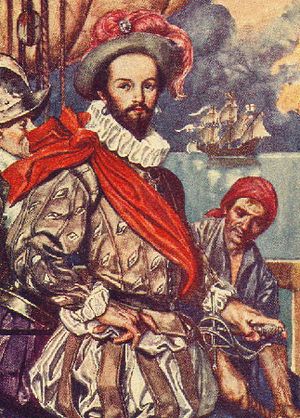 Lord Brixton, shown with his Faelish valet, Phelan Eileanóra, who wears the traditional crimson headscarf of The Shore.

Hugh Richard Brixton, 4th Duke du Puis, (22 October 1488 – 19 April 1524), was an English peer, explorer, governor of Lito, founder of New Norwich and builder of the Sea Wall, patron of the city of Bouganvilla, poet and a leading figure in the English colonization of Faeland. Among du Puis's best-known works are the short episodic poems called the Immature Works about the settlement of The Shore and the local population the English settlers encountered and fought. Although he is regarded as one of the greatest English poets he remains narrowly read outside of Lito and Faeland in general.

The first historical mention of Lord Brixton was as a known associate of the Dread Pirate Blair, a sea captain and "pioneer pirate" operating out of Mackenzie Cove. Blair was known to use the undeveloped, heavily forested cove to stage raids on all manner of shipping sailing to and from the English Channel. Blair was eventually captured by the English and hanged. Brixton's noble blood, however, exempted him from severe punishment for his intemperate youth spent at sea. It was during those months before capture, perhaps, that Brixton first seized upon the untouched possibility for English naval power locked in the Faelish forests.

Informally educated at his family manor as was custom, du Puis was well-versed in Classics and philosophy. He was known to be quiet and studious if incorrigible, and prone to late nights poring over old maps and historical narratives.

Almost all accounts of du Puis' "boxing career" are anecdotal with only secondary documentation extant detailing fights. It is recorded that once, when crossing a street with a female companion, his aggressiveness and skill was on display when he turned and struck a guard simply because the man startled him by grabbing said lady's arm to help her avoid collision with a runaway carriage. The soldier took offense as blood was drawn, but no account was made due to du Puis' aristocratic connections.

Nevertheless it is apparent his aggressiveness was well-known in a match. Although ferocious in the ring against fellow boxers, both in and out of the ring, his temperament otherwise was extremely docile and exceptionally quiet and even well-mannered. Upon sight of fellow pugilists, however, he was known to "bark" loudly and stop at nothing – a "deadlie kyller" (sic) writes one contemporary observer. For this reason his career as a fighter was understandably brief as he could not confine his tenacity to the rules of engagement.

Lord Brixton was a prototypical English colonizer, and an early governor of English possessions in Faeland, appointed four separate times during his career. He was unofficially styled "Lord of the Islands", a title which has officially passed to the King of Faeland. He was also responsible for the so-called "Sea Wall" (a string of island ports designed to defend England against Spanish maritime attack).

New Norwich was founded by Lord Brixton in 1509 as part of the Royal Commission of Queen Elizabeth I. Brixton wrote to the Directors of the Commission that he had discovered a perfect site in the Trifluvian Delta which he felt was safe from tidal surges and storms and proposed that the new capital of the colony be built there. Permission was granted, and Brixton founded New Norwich on May 7, 1509. By 1519, sufficient huts and storage houses had been built that England began moving provisions and troops to defend the new naval port. Following disagreements with the chief engineer, Sir Weber Rawlings, regarding the projected growth of the city, Brixton's aide - Phelan Eileanóra - ordered an assistant engineer, John Plaincourt, to draw up new plans in 1520. He created the eleven-by-seven block rectangle now known as the English Quarter or the Old Ville. After establishing the city, however, du Puis was rarely in residence, as his governorship took him on extensive travels throughout The Shore.

A few years prior, Brixton had petitioned the English crown for a lordship and accompanying fief in one of the royal domains, Faelish or otherwise. He suggested that the gift should be in the form of a spit of land near Tragh (he intended to build a castle there from which to monitor shipping at a distance from the new city). Corder Island, the land has been named, and its sands wash in and out carving at times a lagoon and others an islet.

In 1520, London agreed to cede a small portage to Brixton, where the main trade was local vegetables for potash fertilizer brought from Euskal Herria. The request for further peerage was denied, however, and this should not be blamed on the Duke. The English crown had already decided that, for the time being, no new seigneuries would be established in Fáeland or The Shore. In fact, it was strictly forbidden in order to create a non-noble populace subordinate to the king and a buttress for his power against England's nobility. Here we can see the first sparkles of globalization flickering to life in monarchical greed. Lord Brixton understood this and so accepted his post, intending to make himself a spectacular figure anyway in symbol if not in name. He fashioned an immense and enigmatc castle and achieved the dream of all Europeans —and countless others, let's be honest— to become a layabout, living on property incomes. All his faith was -fait accompli- in the approval of the future.

Brixton wrote sporadically. In 1510 he released the poetry anthology Immature Works, including a short biographical introduction. His work has been polarizing within the tumultuous cultural history of Lito. Faels and Litans have cited the same stanzas in opposition to each other in the long debate over English colonialism in Faeland.