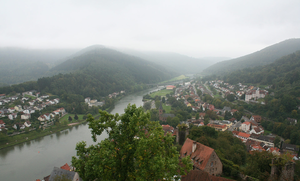 The town of Oderns is located in the extreme northwest of the Saxon Autonomous Zone on the River Unser with a total area of 9.79 km² and a total population of 22,382 inhabitants. The municipality is composed of 5 burghs and is famous for its staunch Christism, the local ale brewery Odernzåle, Ges., and fog.

The name Oderns is said to derive from the Old Saxon god "Wôdan", a patriarchal figure. The city itself, legend says, was established by the Alan king Athac; however, there is evidence of settlements in the area before even Roman contact. The city's church may have been constructed originally by the Alans, but was likely erected during the Nantes Crusade.

Martin von Gruyter began teaching a formalized doctrine of Christism for the first time in history in Oderns' church in 1908, and was appointed rector and revised the Prayer Book according to the new faith later that year.