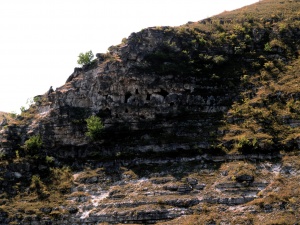 The Omri Caves of Ríocht Fíl are three natural caves of the Colhi Albini east of the municipality of Deva in Landamaer, just over the border in the Saxon Hegemony. Besides inanimate features, they have been found to contain bones of Eurasian lynx, Arctic fox, reindeer (dated to as long ago as 47,000 BCE), the only evidence of polar bears so far found in Faeland, and human skeletons dated to the 3rd millennium BCE. The skeleton of a wolf thought to be 11,000 years old or more was removed from the caves in 1997. The bones had originally been found by spelunkers in 1995 deep within the system, and are being examined by the Natural History Museum in Pompilio, who hope to determine the age and species. It is presumed the animal died whilst hibernating and that its body was later washed further into the underground network. 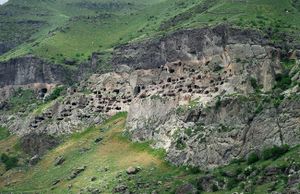 Since prehistoric times the caves have been sacred to several religious groups. Throughout history (and perhaps before) many hermits have taken up residence around the caves, often venturing into the tunnels searching for paths to the underworld, enlightenment, meditation, or simple solitude.

Legends about the caves have existed for many centuries. The earliest tale comes from around Roman times. The story says that a man emerged with dilapidated weapons, claiming he could not find his tribe. Due to the similarity of Iron Age cultures, contemporaries simply believed the man was insane. Theorists believe that this man had likely stepped out from the caves into what would have been his "future" from a Neolithic period.

Some networks of the caves are alleged to allow for "time travel," but this is as yet unproven. This would be accomplished by entering one of the caves and emerging from them at a significantly later time and not experiencing the same relative lapse of time. Such a time dilation would result in the entrant aging less than a stationary observer outside the cave. Some have alleged that the caves may be responsible for German historian and publisher Heribert Illig's missing 298 years (the Phantom time hypothesis).

The reason this has remained unproven is that, to date, no one who has entered the cave's deeper networks as part of a deliberate attempt to duplicate results has come back out again (since experiments began in 1984). What leads scientists to speculate that a "wormhole" exists are two important facts. One, spectral radar imaging has shown that the iron deposits in the caves —so far as can be determined from the surface— are highly magnetized, perhaps enough to bend space-time. Second, bewildered individuals have emerged from the caves at various times in recorded history. In most cases, these individuals were severely malnourished and often delirious, stating they had been lost in the tunnels for weeks or months. In all recorded cases, these people also claimed to not recognize their surroundings or named places or locations that either no longer exist or go by different names now.

Similar stories abound over the course of history. Starting in the 19th century, however, detailed records have been kept by local enthusiasts. Since then, seven persons have emerged.