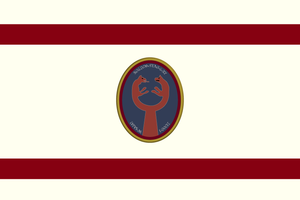 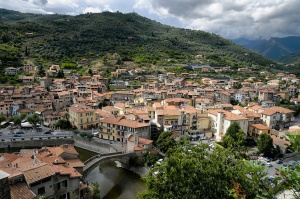 A view of Sânts-Nemhora an the River Albula.

Sânts-Nemhora (lit. "Holy Groves.") is the capital and largest city of Republica Falcatta. Sânts-Nemhora's favorable position between the Alban Sea and Trasumene Bay has encouraged settlement since prehistoric times. The city is a major point of entry for many visitors to the V.F. A census in 2003 put the city's population at 336,473. Sânts-Nemhora is commonly defined as a primate city, dwarfing all other towns in the country. It is the administrative center of Falx and its economic, cultural and educational focus.

Sânts-Nemhora is the administrative center of the country's ager publicus, or unincorporated lands. Between 3-400,000 people live in the urban and metropolitan area. The city is located in the central-southeastern portion of the Margoreci Peninsula, on the River Albula surrounded by the ager. It is referred to as "The Sacred City", a notion expressed by ancient poets and writers due to its long association with the Pentapolian Triad, an indigenous and then Roman triumvirate of principal deities.

When founded (during the Roman Invasion), the town was called Colonia Falcata. In the Middle Ages, it was known as Nemori — the name in its modern form (Sânts-Nemhora) has been attested in written records since 1723. 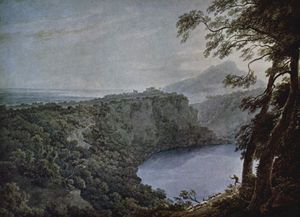 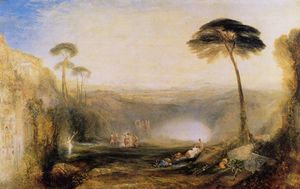 A fantastic painting of the sacred grotto near the groves.

Modern scholarship approaches the various known legends of the founding of the ancient town as cumulative elaborations and later interpretations of an original foundation-myth. Particular versions and collations were presented by various historians as authoritative; and an official history trimmed of contradictions and untidy variants to justify contemporary developments, genealogies and actions in relation to civic morality are known. Other narratives appear to represent popular or folkloric tradition; some of these remain inscrutable in purpose and meaning.

Ventrul (a god) impregnates Rentia (a slave girl) and marries her off to the shepherd Phostol. She has twelve sons; when one of them dies, Photus takes his place to found the priestly College Brothers. The brothers grew up as shepherds. They came into conflict with the poachers of the hills, leading to battles in which Photus was captured and taken to their king, under the accusation of being a thief. Photus was able to escape by "becoming a wolf" (widely perceived to mean that he left disguised as a poacher). He returned home raised a band of shepherds with his brothers to push the poachers into the mountains; the poacher king Nóin was killed and Photus was conjointly offered his crown. He accepted it under the condition that the brothers' homestead was not a part of the kingdom, and refused to live in the hills among his his subjects. They eventually rebelled, placing the dead Nóin's uncle Nthnor as king.

The brothers argued over the best site for battle with the rebels. Photus favoured waiting for an assault on the homestead; whereas his second oldest younger brother wanted to bring war to the hills. They agreed to select the site by divine augury, took up position on their respective locations and prepared a sacred space; signs were sent to each in the form of vultures. Iuls saw six; Photus saw twelve, and claimed superior augury as the basis of his right to decide.

After the battle, Iuls was dead, and Photus buried him with full honor and respect. Thereafter the brothers ruled the city as patricians, but Photus' line continued to rule as kings outside the city until about the time of The Washing.

The city of Sânts-Nemhora covers an area of 12.95 square kilometers (5 sq miles) above the Alban Bay and at the foot of the Montes Xhulii. The city stretches along the valley of the River Albula. The territory of Sânts-Nemhora can be divided into 4 main zones: the city center including its port, the north, the south, and the valley. 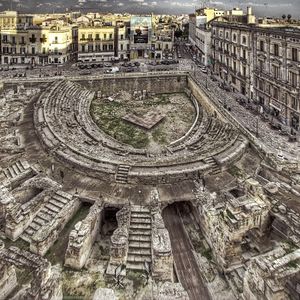 Near the historic city center, Roman ruins are visible. 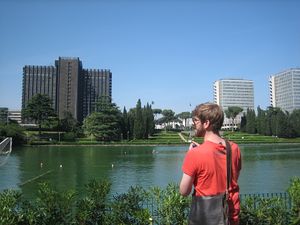 A view of west Sânts-Nemhora, which is much more modern in construction.

Since the founding of the city, there have been relatively few major influxes of non-native cultures. Architecturally, the city is homogenuous in lineage, with styles reflecting in concentric rings from the old town. The city center is compact, low, and primarily of late 19th century construction. The street grid reflect the original military encampment from ## C.E. The port facilities and uptown financial district show the most modern construction, as do the eastern and western edges. See also Bavarian Quarter.

Sânts-Nemhora is home to many cultural institutions and events. It hosts the National Theater and a number of museums and galleries.

The National Theater is the most significant theater not only in Sânts-Nemhora but in all of the Pentapolis. Sânts-Nemhora is also host to the City Theater.

It is rich in museums and galleries. Several noteworthy museums being:

There are several notable art galleries in the ___ District.

The historic Cinema Mondal (locally known as il Cino), built in 1928, was closed in November of 2008 for restoration. It is considered a classic example of Art Deco architecture.

Sânts-Nemhora is without a doubt the media hub of Falcatta. It is home to the headquarters of the state-owned public radio and television broadcaster RTF. Commercial broadcasters in Sânts-Nemhora include TV Falx, TVMontes, FBC.

All Falx's daily newspapers (the oldest being the daily: Spectator) are published in the city, as is the popular weekly magazine Notice.

The most popular sport by far is association football. The two local teams share a very longstanding rivalry: A.C. Falcatta and CdF Sânts-Nemhora.

Sânts-Nemhora is not only the administrative center of Falcatta but also its main economic engine. Most of the state's industrial, financial and commercial base is in the city.

In the early 2000s, Sânts-Nemhora's financial and service sector expanded rapidly and its economy became more service-oriented. The two stock markets as well as most Falxian banks are situated in the city. Economic activity in Sânts-Nemhora has mostly shifted from shipping to telecommunications, construction and banking. Investors and foreign companies are very comfortable with Sânts-Nemhora's long, stable economic history.

As a side effect, the prices of property and development land in the the city have increased greatly. The growth, although somewhat slowed down due to late 2000s recession, is expected to continue.