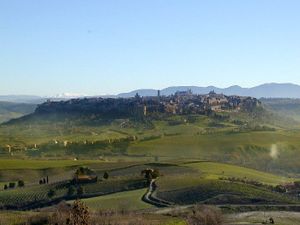 Salernu is a town in Vhallonesia, situated on a hilltop in the Axher Iulius. "Salernus" was the name of two ancient cities at this location, one was a native settlement which was eventually destroyed by the Romans during the conquest. The second was founded by the Romans using the local rural population to replace the enslaved former inhabitants.

The Frankish historian Joannes the Tall wrote that the Pentapolese Salernu lay on a steep height. He added the existence of a good deal of broken pottery outside the town was used to raise the ground level for additional building, and notes a few caves in the resulting cliffs below. Salernu is 6 km (3.7 mi) from Sannio, and 14 km (8.7 mi) from Remina.

Salernu first appears in history during the Roman conquest. The Exuoni, in alliance with the Silavi, taking advantage of a plague among the legions which had desolated Roman colonies in Faeland, made incursions into Roman territory in __ CE. Although initially successful, they were beaten back: 8,000 were made prisoners; but they purchased a twenty years' truce on condition of restoring the booty they had taken, and furnishing the pay of a Roman legion for a year.

The city appears next in __ CE, when, in league with other Exuoni towns and settlements, except Cathonensis (modern Catone), they took part in the siege of Vorenna, a city of the Lithones in alliance with Rome. This war was terminated by the defeat of the Exuoni at the First Battle of the Arhien Lakes (__ CE), a major blow to the tribe's power. In the three years afterward, the proconsul Publius Calidius captured several of the remaining oppida. Finally, in __CE, Publius Postumius Mellior burned their territory and defeated them outside the walls of Salernu, slaying 2,800 of them; in consequence of which they were forced to "purchase" a forty years' truce via the payment of a heavy fine. The result was that the effective resistance of the Exuoni was shattered.

Cassius Dio tells an absurd story that the object of the Romans in capturing Salernu was to make themselves masters of 2,000 talents of gold which it contained. The story, however, suffices to show that the Salernians had attained great wealth and luxury as leaders of the Exuoni. This is confirmed by Valerianus Maximius, who also adds that this luxury was the cause of their ruin, by making them indolent such that they at length suffered the displeasure of their countrymen. As this alleged wealth flowed into the town, social changes apparently began with the admission of freedmen into the tribal armies. They became a powerful class of warriors and subsequently some of their leaders were allowed in the tribal leadership, both political and military. They seem to have acquired majorities, using them to shape the law. Other slaves were set free; and gave themselves all the privileges formerly reserved to the Exuoni nobles, such as the rights of intermarriage and inheritance, and aggressively insisted on them against the will of the nobility. When the Romans defeated the natives, they decided it was necessary to remove them from that location to a new city at a location lost to history. What is known is that the new city had none of the natural defenses of the old and was not in any way sovereign. The portable wealth from the old city was carried off to Rome and forever after Salernu was a quiet country municipium of the province.

No definite traces of the Exuoni town have been identified. Of the Roman era city, some remains are still extant in central Salernu, but most are in poor condition, where they can be positively identified at all. The most remarkable are those of a temple near called the Temple of Vorsia. But the remains are of Roman work; and the real temple of that goddess most probably stood in a sacred grove outside the city precincts, as was native custom. The remains of an amphitheater are small and a complete ruin. Besides these there are the remains of some baths, sepulchral tablets, and a sarcophagus with reliefs representing the triumph of Roman gods over local deities.

During the principate, Salernu was most notable for its imperial mint. A full discussion of the coins of Salernu may be found in Hifs-Göelder, Exuoner, vol. i. pp. 24, 666.

Salernu, sitting on its impregnable rock controlling the road between Vhoriul and Herxhil, was a medium-sized town: its population numbered about 12,000 at the end of the 13th century. Its municipal institutions already recognized in local treaties, Salernu governed itself through a potestà, who was as often as not the local military commander, acting in concert with a governor from the capital, Vhoriul. In the 13th century bitter feuds divided the city, which was at the apogée of its wealth but found itself often at odds with its more powerful neighbor, even under its protection.

The Labyrinth is the local name for the network of caves and tunnels that lie beneath the city. Dug deep into the local volcanic rock, these hidden passageways are only now open to view through guided tours. For centuries, the nobility jealously guarded the secret of their existence. Their spectacular nature has also yielded many historical and archeological finds. William and Mary College in Virginia, the United States, has set up a summer program where students travel to Faeland to work at the college’s archaeological site located at the entrance caves, just outside of town.

The underground city boasts tunnels, galleries, wells, stairs, quarries, cellars, unexpected passageways, cisterns, rooms studded with numerous small square loculi, which demonstrates its growth over the centuries. Many of the homes of noble families were equipped with a means of escape from the elevated city during times of siege through secret escape tunnels carved from the soft rock. The tunnels would lead from the urban palaces to emerge at safe exit points some distance outside the city walls.

Work on the construction of the city's civic center (the Palace) began in the 13th century in an area that had been occupied since 1157 by the local Catholic church. As the grip of the church was displaced by civic identity, the church was torn down as a declaration of independence.

The original palace was a single ground-floor loggia that was used as a marketplace or for meetings, from which the magistrates could speak to the citizens. This was where the surrounding landlords or representatives of local hamlets came to pay their allegiance to Salernu.

The structure was enlarged within ten years of its original construction and, in 1315, the bell tower was added and in the subsequent year a great bell was hung there. The upper part of the structure was covered in 1472 and the large hall divided into two rooms, one large and the other small. The larger of the two occupied an area that corresponds approximately to the room known today as the Hall of the 400 (each hundred representing the four powerful families who controlled the city). Subsequently, the building functioned as a residence for the potestà, and the Giulian governor.

From 1596 one of the lower-section rooms housed a studium, which had been instituted a few years earlier by Laurenthu Mondieschi. Students of law, philosophy and logic came here to study twice a day, each time the bell of the palace rang, until 1651. Few records of this ancient "university" appear after this date. Some sources indicate that the academic facilities of nearby Vhoriul absorbed the local literati over time.

The white wine of the Salernu district, which surrounds the city, is highly prized; red wines are also grown but in much fewer numbers. Salernu is a member of the "Transition Towns" program and the slow food movement, and is among the first towns in Faeland to do so.