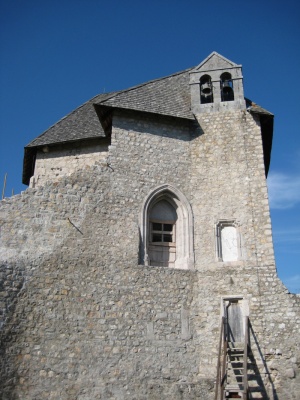 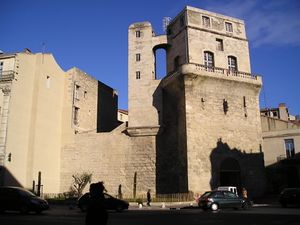 Servon (orig.: Serboi) is a city in northeastern Ríocht Fíl. It is the port of the Raebigho River. Its population is quite small, but it is also one the fastest growing cities in Faeland over the last two decades due to its position between the greater New Norwich and Códini-Frosino metropoleis. Servon straddles the linguistic border between the Romance north, Faelish west, and English-speaking south. The local spoken language is Anglo, a patois of southern Vallo dialects and English with a marked Faelish vocabulary. Servon marks the southern limit of the Faelish Riviera.

Servon is one of the few urban settlements within the cultural-linguistic sphere of influence of the Latin Coast that was not originally a Roman settlement. It was founded in the late 300s/early 400s CE during the Alan Invasion.

In the Early Middle Ages, the town of Serboi was the major Alan settlement in the area, but rapid growth encouraged settlement further inland. Serboi, first mentioned in epigraphic evidence in 403 CE, was founded under local tribal rule, by mercenaries of the Roman empire, resettled from Armorica. The surviving towers of the city walls, however, are from a later date. Servon came to prominence in the 10th century as a trading port and neutral harbor with trade links connecting the Bay of Biscay and the Raebigho valley. Under King Circassus a harbor was dredged to accommodate and refit Nemhoran ships during their war against the Vetial States, waged by Luchio Vohno (known as "Probus"— the Pure). At this time, the rising Kingdom of Aln was struggling to position itself as hegemon over the sub-Roman states of the Colhi Albani. The presence of the fleet provided shelter to the Nemhorans as well as visible allies to leverage against Alnish aggression.

The city was the starting point for the Nantes Crusade in the early 13th century. The city used this opportunity to became independent of the kings of Aln in 1231. This marked the start of Servon's golden age. The city's university was established in 1320 and was one of the chief centers for the teaching of medicine. King Odhair of Aln confirmed the city's freedoms in 1267 and granted the city the right to choose twelve governing consuls annually.

In the 14th century, Servon gained a church (not yet a cathedral) dedicated to Saint Peter, noteworthy for its being donated by the Bishop of Nantes. With its importance steadily increasing, the city finally gained its own bishop, Gastone Colonne, in 1301. 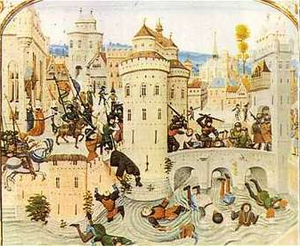 An artist's fanciful impression of the Siege of Servon.

At the time of the Renaissance in the 15th century, Servon's star was beginning to fall, overshadowed by the growing merchant marine power of the Vetials. In 1502, King Althrohn of Faeland besieged the city and retook it after eight months, afterwards building the Citadel of Servon to secure it as a bastion against Latin power to the north. Upon his return to the midlands, however, the city had trouble defraying the costs of the maintenance of the fortifications and the accompanying garrison.

Servon gradually slipped out of the political scene.

During the 20th century the city has re-emerged as an important port and rail junction. In the 1960s, its reputation grew dramatically as its university became recognized as a place of high linguistic scholarship. An influx of students helped build the service sector, and post-graduate students and professors have often elected to stay in the city. In the 1980s and 1990s, the city drew attention with a number of major redevelopment projects, such as the archaeological museum for Faeland's "Sarmatian Past" and especially the Marine District, lining the port with pleasant shopping and cafés.

The city is situated on hilly ground along the coast on the River Raebigho. The name of the city, which was originally Serboi, is said to have stood for the predominant clan among the first settlers, the so-called Alans.

Servon is located nearly equidistant from the two largest metropolitan areas of Faeland.

Servon's highest point is the citadel, at an altitude of 11 meters (37 ft). The city is built on four hills, thus some of its streets have great differences of altitude. Some of its streets are also very narrow and old, which gives it a more intimate feel.

The University of Servon is one of the oldest in Faeland, having been granted a charter in 1320.

It is not known exactly at what date the schools of literature were founded which developed into the faculty of arts; it may be that they were a direct descendant of the Vallo-Roman schools of the Latin Coast. The school of law was founded by Felnius, a doctor from Códini. The school of medicine was founded perhaps by a graduate of the Caudian medical schools; it is certain that, as early as 1437, there were excellent physicians at Servon.