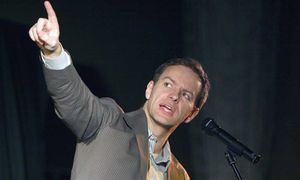 Stanislao Conti is the current Director of the Federal Defense Ministry. He is of mixed Polish, German and Fallone descent. He is well-known for —and was elected because of— his strong stance against military spending and is expected to jump-start the downsizing of Faeland's armed forces.

He is is from Falx, where his family immigrated following the collapse of the Weimar Republic in 1933. Before World War I, his family had resided in Wrocław, Poland. Stanislao is a family name.