Difference between revisions of "Talk:Treaty of London" 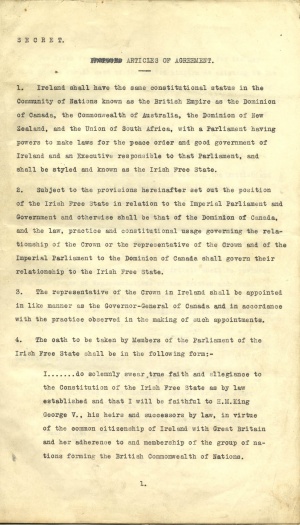 Not sure which article would use this, maybe the idea first mentions in Faeland in wwii, but the idea will be that despite UK leaving Faeland, they arbitrarily recall the Treaty of separation and claim they have rights to military bases and hand over said rights to USA. (This is their original claim to get in the island). US steps in and starts building all sorts of bases, stations, ports, installations, emplacements. they turn the island into a fortress basically. And could the germans have mounted bombing raids wouldve but instead maybe launch a few V-2s or whatever. But this is how US gets in.

See the EVIDENCES project of the Anglo-Faelish treaty and rewrite this article per the clauses there.

I think what happens is that UK agrees to back out of Faeland but then in WWII kinda renegs as though it has the privilege to invite allies (USA) in to have a go at her girl, so to speak. offering bases to american use, so by the gasoline war americans have a toe hold.

the other notes -the destroyers for bases- contradict the freedom implied by the A-F treaty....

i was thinking this treaty leads to a de facto occupation of the islands during wwii by american forces.

the timeline being that there is the revolution and independence, but the clause permits england her bases. following the civil war, these are largely left unoccupied by Brits until the threat of war emerges again in late 30s. at this point however it has largely become too late for britain to build up any real fleet around the island, nor do the faelish particularly want it, although exhausted after a war they could hardly have stopped it.

so, but out of fear, the americans occupy them to prevent germans doing so, and thus increasing their u-boat patrol range.

new thoughts about how this extends into cold war era (maybe another reason the republic fails actually): because of ships for ports....faeland is now okinawa-ized after wwii as a depot and port of call and air base by NATO but feels upset by this. like they traded brits for americans. so the civil war ends just before wwii, and the military occupation is seen as a necessary expedient. if they wait, and help them keep the germans from coming in which they will, brits agree to leave but hand over authority for americans to do the work of occupying. but agian, during the war, no biggie. after it was all over, tensions within the republic were that the state had sold out, and a rapid succession of presidents were all at some point or other deemed traitors and in the pocket of the americans still. factions fought constantly and everyone wanted the americans out but the property was effectively nato, so they were occupied whether or not they liked it.

i think its a tthat point that the royalist faction claims the only guarantor of true sovereignty for the island is the king. in some places, like the border with valaduria, this erupted into renewed fighting as some of thes epeople were seen as others... for example a few small irregular battles broke out as faels tried to retake some of the agreed borders of the dhiall. and likewise the republican valaduria saw the royalists as basically rebellion, and was happy to let volunteer regiments put down a VERY royalist region in the Colhani Mountains and beyond, into the Marcher Scales. They would have seen this as aid to a sister republic. Ultimately the royalists win and i dont know...

but in my notes today i wrote that it should be that they end up like sardegna. i'd like to write some articles for the eventual NEWS BLOG about damage and recovery ideas. things like that. --chullachaqui 20:01, 10 October 2016 (EDT)

because the environmental damages would be ongoing.

anyway, make sure the above ties in here:

Lordship of the Littoral

spinoff article but, basically those enacting said legislation were looking to set up something like the Lordship of Man or a status otherwise similar to a depedency, albeit with the over-glorified feudal trappings of the Channel Islands or the like. The more practical among the advocates were looking for something akin to British Honduras but with a full Governor.