Difference between revisions of "Talk:Vianitá"

Almost two thousand years — and not a single new god!

at its core, a form of fire worship wherein all deities are recognized to be one deity, and that worthy of worship as both terrific power and deadly foe at same time is...fire. pyrolatry

"(beings) men behind the sun" (name of gods), belonging to the category of the Semones (Semos, a relation of rhomos?) https://en.wikipedia.org/wiki/Sancus

leine "at the age of"

?-ism (time) religion itself is considered the worship of time, that is the worship of the "mental organization" of space into something humans can understand. in other words, the worship is of the fundamental faculty for structuring the universe into something digestible for the human species. otherwise the world simply "is". what is is the "be"; what humans imagine is "the god" (creative faculty- hence god is always the "creator"; and the only creator men know are themselves), mistaken so often in history as man himself (even if created in imitation of a man: e.g. olympians, jesus).

https://en.wikipedia.org/wiki/Contumacy stubbornness or refusal to appear before written law

regardless, worshippers tend to assume the existence of a singular god, but do not necessarily associate god with aspects of a character, avatar or personality. Rather they envisage God as an impersonal theoretical absolute (platonic form?), who can be worshipped only in part (or in a human form).

religious symbols for vianita....something to work on:

some notes to incorporate 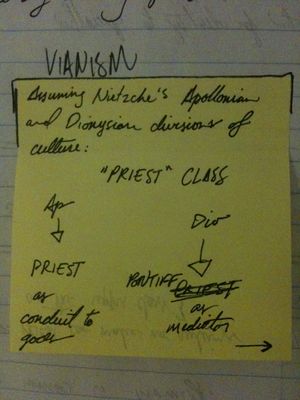 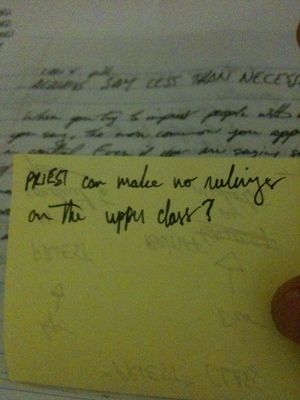 see effatio above it as well

an email discussion to incorporate

https://en.wikipedia.org/wiki/Guanches (religion is of note)

Impressive inspiration for my own work, should read all this section: https://web.archive.org/web/20090201042737/http://bergonia.org/Rel/Religion.htm

from Commonplace vi, thurs apr 11 1041: Cultural note, in a temple of the geminate/liminal or threshhold deity (sic., should be deities), represented as two clasped hands. (etymological root for wall or boundary as wall in Old Faelish. —thus distinguishing between the wall as seperator, mür, and wall as commonality, ___ —. Not prone to anthropoform deities normally, on occasion the faels might illuminate a "sea-person" (i.e. non-islander) by way of just such a graphic illustration. in this case twin deities hold hands thus creating a semi-impermeable barrier, but also thereby demonstrating a sacred trust implicit in the mutual respect inherent in the creators of (believiers in) the accepted boundary. That is the spiritual polar equator.

[14:12, 2/1/2018] like as the divine xinaleit: she can possess a spider by occupying the eyes and control their hydraulic legs... when she descends to earth to interact with mortals

gods heart a burning torch. in his veins runs fire not blood

XINALEIT goddes name is fire that sees. Her ceremonies performed with a different version of the mirror fire. Instead of debater her fire is the ring around central hole which is filled with a black liquid in. Which is placed a concave bowl. But around the fire are stones which glow green when heated.

this whole article is good but here specifically are some nice ideas:

and his diamond clubbed heracles version:

coca cola is god of omnipresence

the returning god of the east... from Rome: covered in blood (wine) because he is decadent. he is pulled by wolves in a chariot??

work on some vian deities. etc.

a college of virgin priests. not women but men. for it was seen as wasteful to not allow women to live fully. whereas men are simple vessels for seed, and therefore are wisely stockpiled.

one for them one for us

may be a little too "neo-pagan"

should be modeled on my sisters, perhaps with mythical children of their own. a cult originating in the visentine tribes and absorbed into the vallo-roman culture

https://en.wikipedia.org/wiki/Seven_Days_in_New_Crete this one is particularly well-suited for me, and therefore depressing. it basically creates a god structure ive been trying to craft. kind of annoying to, once again, be beaten to the punch.

As for the Church, I cannot conceive anything better for the culture of a country than the presence in it of a body of men whose duty it is to believe in the supernatural, to perform daily miracles, and to keep alive that mythopoeic faculty which is so essential for the imagination.

good for a parallax view on the conditions of modern life:

as a full way of life

May the earth cover your tomb with thorns, o X,

and may your shadow thirst for ever. And may the Manes not sit beside your ashes

and the avenger terrify your filthy bones with his hungry dog's cry.

May your grave be an old amphora with a broken neck

and may everyone pelt that grave with sharpened stones

if you blasphemously challenge the fire of the God

and may you always be cursed. 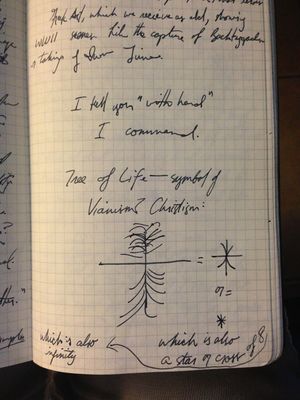 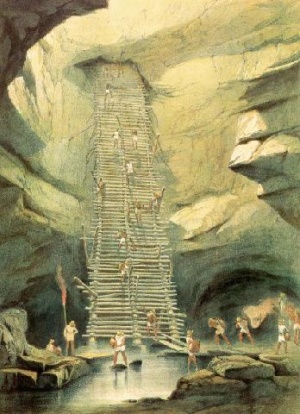 underground worship at a spring

gods created mountains with the chop of their hands

a creation myth that suggests a previous technological civilization.

it is also supposed that the nation arose out of a sliver of condominium:

creation of the word

origins in the slur

look also at https://en.wikipedia.org/wiki/Phototypesetting for interaction of light into the entire process which is essentially output/input. O/I. between humans. and naturally, in this communicative industry, a special language and set of skills are necessary to keep this [riestly class in communion with each other. or moontonous, like monks, at machines. slaves. ref. also the fragment on machines (notes) pictured right and also in c-III-1950.7.27.7.2013.

also foundation for a new partition of governmental power into "justice" "defense" and the "living" but bound in 3-way centrifuge... held together only by...each other. triune

Enri/Inri (from ancient Alan Enarei) meaning "priest" - but their role is quintessentially faelish. they are more akin to monks or acolytes than points of convergence of the spiritual and temporal. not considered conduits of the divine nor ministers of sacraments. they do assist the lay believers and lead them in worship but typically have no formal status or larger corporation to which they belong. they make no state within a state, beyond temple orders or monastic groups.

funny how all this shit drifted west from the east. from india.

vestments or other articles 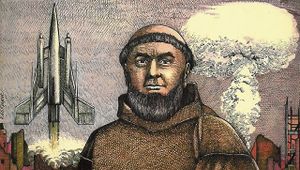 Gods go by many names and appearances to make sure they maintain an optimal number of believers.

might need to tie in with zoroastrianism as well.

perhaps einstein himself is a prophet.

not sure they belong here but we'll sort it out

see here for modern version and then work backward to establish traditional:

this was here or noted somewhere, necromancy...cloud divining. find it

both inhumation and creamtion were practiced. cremation was introduced by the romans.

http://en.wikipedia.org/wiki/Shaft_Graves in conjunction with https://en.wikipedia.org/wiki/Menhir make the burial appear like a growing tree, looking like a spear stuck in the earth. Man as roots, spear as representation of him in this world...a tombstone, if you like but not intended to offer information on the deceased, only to represent him as a "new growth" on the island.

Menhir in Faeland were called Firhen (VEE-ren)....literally "men", due to the spears representing a fallen warrior

see about inland empire of lakes, where this practice originated:

Around the west and southern and northern coasts, cremation and "viking funerals". Toward the interior creamtion was also practiced but more often burial in tombs.

soul is understood to be not one thing but two things. together they are soul, separate, not. they fuse and generate life, and after death are discrete again

faelish term: navin - a spirit wrongly taken from the body due to clerical errors, but therefore permitted to stay outside afterlife and roam freely. typically happens because after cremation, bodies and souls cannot be reunited

had its origins as an alnian royal household religion, and then during nantes crusade expanded into a "national church" type institution. a role it still has to this day