Difference between revisions of "Throne of Űrías" 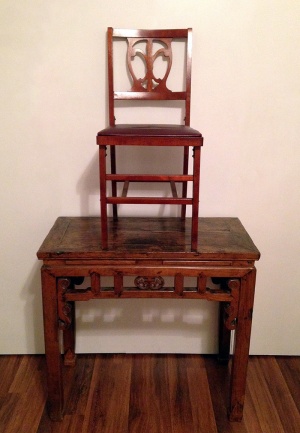 The Throne of Űrías is a recent acquisition of the Vŭzel Herrien of Ríocht Fíl. The Sasarg purchased it because it was the only one left out of a formerly complete set. The old throne was melted down and replaced in the mountains.

The Throne of Űrías is a chair, pretty much. The current Throne is a wooden collapsible dining chair with severely depressed cushions of unknown date and manufacture. The former throne, its namesake, was a metal, wood, and stone affair which -according to legend- had been in existence in some form or another since the days of the Viriducian Empire. As with most of these things the claim was dubious. And since the throne's destruction, the possibility of a conclusive determination on the matter is now lost forever.

Nevertheless the current seat is made from wood which supposedly came from a most sacred tree of Diuchill, dated from the period of the Alnish Translation. Its precarious arrangement is reflective of the instability of authority.