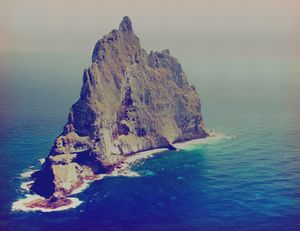 Tlonha is not really a town in Vhallonesia. Situated on a massive sea stack, it amounts to a campsite and a radio broadcasting tower atop cliffs on the only path up the "island" of Morelia. Because it is habitable and a radio station is sited there with a single permanent resident, a postal station recognized a formal "town" of Tlonha. The radio engineer who set up residency in the tower chose the name of the town when he began broadcasting in 1987. By his account it was an island off the coast of the the Malvinas where he was once marooned with nothing but projectors, cameras and televisions.