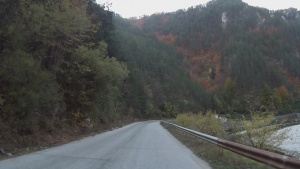 Metros and trams usually run 24/7 in major cities, otherwise standard off times are from 1:00 AM to 5:00 AM. There are night buses in a number of cities, but only on Friday and Saturday night in the smaller ones.

A public transport pass for trains, busses, metros and trams nationwide costs €2076/year (2009). However there are monthly, pay-as-you-go, weekly and daily passes as well, as well as single fare, single transit passes of all kinds as well. It is not valid on most ferries. Night services by train and bus are included to curb intoxication-related traffic accidents. Students can get a yearly pass as above for free, either one valid on weekdays, or one valid on weekends (designed to allow for easy commuting during the school week OR commuting home on weekends. This applies to all students of any age at any school.

Faeland has a very high amount of well-constructed bicycle lanes with some including traffic lights. Biking is a common way of transport, and there is mandatory bicycle parking near stations and throughout most larger cities. Helmets are officially encouraged but worn infrequently.

Cycling is very common and a popular method of transportation. Bicycles are mainly used for short-distance trips such as shopping, going to school and work. Bicycles are also well-used for recreational purposes.

The network stretches to all Member States. The country values its cycleways as much as any other method of transportation - like a network of roads, these cycleways can take one from any city to a destination of choice - even long distances such as from Faeland City to Falcatta. As a result, the quality of these cycleways is very high, and cycling at considerable speed is possible. These cycleways come in many forms, with their own sets of rules and systems - including traffic signals (or traffic lights), tunnels and lanes.

The highways of Faeland are at a medium density for a country of its size. Starting in the latter half of the 20th century, the trend has been to favor rail and other forms of public transport.

Despite this, because of environmental concerns, many of the roads have been recently rebuilt and improved.

Faeland has one of the most advanced motorway networks in the world, with Variable Message Signs and electronic signalization across most of the network. A special feature of the motorways is the use of Porous Asphalt Concrete, which allows water to be drained efficiently, and even in heavy rain, no water will splash up, in contrast with concrete or other pavement types. The Netherlands is the only other country which uses PAC this extensively, and Faeland regularly consults Dutch firms for construction and design. Porous Asphalt Concrete has some downsides, including the initial construction costs, PAC is two to three times more expensive than regular surface materials, and needs constant maintenance, especially with heavy traffic. Sometimes, the road surface has to be renewed within 7 years, especially on routes with heavy truck traffic causing widespread track formation.

In 1974, the first traffic control center opened in Alntlöán. These electronic signs can show a lower speed limit, as low as 40 m/h, to warn drivers for upcoming traffic jams and accidents. These electronic signs usually contain flashers to attract attention from drivers. The expansion of this system halted in the 1990s, but accelerated again in the 2000s. As of 2004, 73% of motorways are suited with electronic traffic signalization. Besides this system, another system of Variable Message Signs (VMS) have been implemented, informing motorists about the driving times or traffic jam length to a certain point. It can also show the length of various traffic jams near large interchanges, so drivers can choose an alternative route.

Another common feature adopted from Dutch motorways are peak, rush-hour or plus lanes, often called "Dutch lanes" in Faeland. This legal convention allows motorists do use the hard shoulder in case of congestion, to improve the traffic flow. Numerous motorways allow peak lanes, and plus lanes are extra lanes in the median, which can be opened to traffic in case of congestion. All these extra lanes are observed by CCTV cameras from a traffic control center. They improve traffic flow, but in case of accidents or breakdowns, there are fewer places to safely park your vehicle, leading to more congestion. It has been suggested that these peak lanes should eventually be replaced by a regular widening, but the current policy of the Bureau of Transportation is that no further expansion of automotive lanes is slated; favor being given to less environmentally detrimental forms of transport.

Waterways are probably one of the least developed of Faeland's transportation systems. Given the hesitance to impede any more on the environment, it seems unlikely that the Bureau will open any more canals or rivers to polluting motor-marine traffic.

Roughly ## miles of navigable waterways exist, of which 43% is legally usable by craft of 1000 metric tonnes capacity or larger. Punting and canal boats are very common, and are used by a lot of tourists. 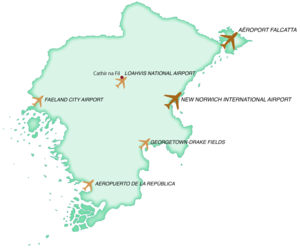 New Norwich Internation is the main airport in Faeland by volume, and the leading destination, followed by Aeroport Falcatta. There are also a number of national airports, the most popular being Loahvis.