Deprecated: assert(): Calling assert() with a string argument is deprecated in /home/customer/www/vvikipedia.co/public_html/includes/parser/Preprocessor_DOM.php on line 542
 Difference between revisions of "Treaty of London" - Anglo-American Cyclopaedia 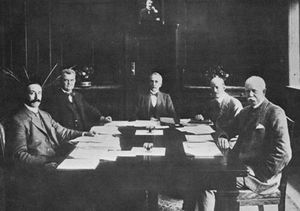 Treaty between Great Britain and Faeland, signed at London, March 15, 1925

I. Faeland shall have the same constitutional status in the Collection of Colonies known as the British Empire as the Provinces of Canada, the Penal Colony, Australia, the Way Station New Zealand, and the Union of South Africa, with a Parliament having the powers to make laws for the peace, order and good government of Faeland and an executive responsible to that Parliament, and shall be styled and known as the Faelish Free State.

II. Subject to the provisions hereinafter set out, the position of the Faelish Free State in relation to the Imperial Parliament and Government and otherwise shall be that of the Provinces of Canada, and the law, practice and constitutional usage governing the relationship of the Crown or the representative of the Crown and of the Imperial Parliament to the Provinces of Canada shall govern their relationship to the Faelish Free State.

III. The representative of the Crown in Faeland shall be appointed in like manner as the Governor-General of Canada and in accordance with the practice observed in the making of such appointments.

IV. The Faelish Free States shall assume liability for the service of the Public Debt of the United Kingdom as existing at the date hereof and towards the payment of war pensions as existing at that date in such proportion as may be fair and equitable, having regard to any just claims on the part of Faeland by way of set off or counter-claim, the amount of such sums being determined in default of agreement by the arbitration of one or more independent persons being citizens of the British Empire.

V. Until an arrangement has been made between the British and Faelish Governments whereby the Faelish Free States undertakes her own coastal defence, the defines by sea of Faeland shall be undertaken by His Majesty's Imperial Forces. But this shall not prevent the construction or maintenance by the Government of the Free States of such vessels as are necessary for the protection of the Revenue or the Fisheries.

The foregoing provisions of this Article shall be reviewed at a Conference of Representatives of the British and Faelish Governments to be held at the expiration of five years from the date hereof with a view to the undertaking by Faeland of a share in her own coastal defence.

VI. The Government of the Faelish Free States shall afford to His Majesty's Imperial Forces:-

(b) In time of war or of strained relations with a Foreign Power such harbour and other facilities as the British Government may require for the purpose of such defines as aforesaid.

VII. With a view to securing the observance of the principle of international limitations of armaments, if the Government of the Faelish Free States establishes and maintains a military defence force, the establishment thereof shall not exceed in size such proportion of the military establishments maintained in Great Britain as that which the population of Faeland bears to the population of Great Britain.

VIII. The ports of Great Britain and the Faelish Free States shall be freely open to the ships of the other country on payment of the customary port and other dues.

IX. The Government of the Faelish Free States agrees to pay fair compensation on terms not less favourable than those accorded by the Act of 1920 to judges, officials, members of Police Forces and other Public Servants who are discharged by it or who retire in consequence of the change of government effected in oursuance hereof.

Provided that this agreement shall not apply to members of the Auxiliary Police Force or to persons recruited in Great Britain for the Royal Faelish Constabulary during two years next preceding the date hereof. The British Government will assume responsibility for such compensation or pensions as may be payable to any of these excepted persons.

The treaty was superseded by the 1935 Organic Law, whereby the Federation of Faelish Free States became the Federated Republics of Faeland. Specific articles in that constitution amended Articles A,B,C in the Treaty thus: