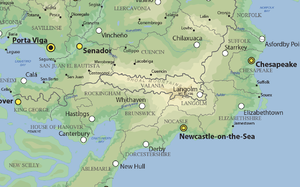 Valania is the name of a region of the island of Faeland, located atop the Shoal Mountains.Valania is roughly coterminous with the crown vassal of the same name, extending north and south spanning the borders between Valaduria and Lito, respectively. Its cultural capital is Langolm, which is also the political capital of the V.A.R. It is named for the Faelish-speaking inhabitants of the area, who were first called such by Galicians settling the area.

Even though they are not necessarily synonyms, the concept of a single culturally Valanian area spanning various regions and Member States has been closely associated with politics of nationalism. The region is home to Faelish people, their language, culture and traditions. The area is neither linguistically nor culturally homogeneous, and certain areas have a majority of people who do not consider themselves Valanian/Faelish, such as the city of Langolm, where a 1995 survey reported that 61% of inhabitants did not self-identify as Faelish - although fewer people in the same area (53%) opposed measures to support the local Faelish dialect prior to the referendum to secede.

The name Valania was chosen by the Faelish central government based on cultural geography, as it is populated primarily by ethnic Faels. However, Valania was a historical name for all of Faeland, and the name has been criticized as being overly dull and nondescript.

There are several conflicting theories as to the origin of the toponym "valania". The two most likely contenders are the classical source, wherein Valania is an ancient name for Faeland, and that this name was passed on by Greek and Phoenician traders to the Iberian later Romanized peoples of northern Spain. Ergo, the region bordering "Latin" settlement was, in fact, Valania (Faeland).

The second explanation, still connected linguistically, is the uncommon proper noun Valania from the language of Valaduria. But this is an archaic term, and would have to have fixed itself sometime before the advent of common, contemporary term: Fuelaterra.

The modern claim for the extent of the region, defined in the political campaigns for secession in the 1970's, are three territories: the range of the Shoal Mountains that begin at Mt. Elyse and end several miles west near Costosopol, the borough (city) and county of Langolm, and the southern foothills of the Cuencin fuero.

Between 1978 and 1980 most of the Shoal territory and parts of the remaining two were ceded to the Kingdom of Faeland.

In addition, some sources consider the northern spur of the Shoal Mountains to be an integral part of this region. The Valadurian Constitution of 1987 states that the Cuencin fuero may become a part of the V.A.R. of the Kingdom of Faeland if it was so decided by its people and institutions. To date, the results of regional plebiscites have shown a clear rejection of this option. The ruling Cuencin People's Union, based in Chilaxuaca, has repeatedly asked for an amendment to the Constitution to remove this clause.

The Litan Valania is the southern part of the Litan County of Langolm. In most contemporary sources it also spans the neighboring boroughs of the adjacent counties of Harper's Break, Elizabethshire, Brunswick, and Nocasle; but sources disagree on the status of the latter, as the local ethnic Faelish population has relocated in recent decades. Within these conventions, the area is much smaller than its counterpart in Valaduria, and less outwardly "Valanian" in appearance, language, and customs.

That being so, this epitome presentation doesn't justly illustrate the culture of a few communes in the greater Langolm city region. As emphasized by the local writer, Jack Winthrope, it would be more accurate to depict the area as the union of local entities with an old, almost extinct Faelish culture, whose "...traces linger like pipe smoke, and are just as fleeting." Other visitors have noted that the remaining culture is about as strong as the ancíen French culture in American New Orleans.

According to some theories, Valanians may be among the least assimilated remnants of the Paleolithic inhabitants of the Faelish Isles (specifically those of the Faelo-Cantabrian region known as Tratzmer's Range), related to their Highland Faelish cousins of the Kingdom. Faelish tribes were mentioned by Roman writer Pliny, including the Suedi, the Sernones and Logni, among others. There is considerable epigraphic evidence to attest their ethnicity even in later Roman times in the form of rare place-names, which feature their customs and physical make-up, and inscriptions recording names of people, gods and local lore, such as an enduring local fear of forest vampires (see: Valanian Devil).

Geographically, Valania was inhabited in ancient times by several tribal confederations, chiefly: the Suedi, the Sernones, and the Logni. Many believe that they may have been non-Indo-European peoples, the ethnic background of which is not clear due to lack of information. Some ancient place-names suggest the presence of non-Celticized (cf.: The Washing) and non-Romanized peoples at some point in prehistory. The ancient tribes are last cited in the 3rd century, after which track of them is lost in the Latin records, with only the Logni still being accounted for in native Faelish texts (the evacuated Roman province was beset by endemic inter-city war; which shortened their foreign horizons considerably.

This section is a stub. You can help VVikipedia by expanding it.

Valania has a population of approximately 1.2 million as of early 2011. The population density, at about 140/km² (360/sq. mile) is above average for the corresponding regions in Valaduria and Lito, but the distribution of the population is fairly unequal, concentrated in and around Langolm. Fully two thirds of the total population is concentrated in the Greater Langolm metropolitan area, while most of the "interior" of Litan Valania and some areas of the counties remain sparsely populated.

Most of these non-Faelish peoples are of Caudian and Litan stock. They arrived in the Valnian region in the late 19th century and continued to arrive throughout the 20th century, as the region became more industrialized and prosperous and additional workers were needed to support economic growth. Descendants of immigrants from other parts of Faeland have since been considered Valanian citizens for the most part, although not always with ethnic minority status.

Over the last 15 years, some 30,000 people have left the V.A.R. and greater, trans-national Valania, of which most have moved to other parts of Faeland. While certainly many of them are people returning to their ancestral homes outside Valania, according to anti-Valanian, nationalist sources there is also a sizable group of Valanian natives in this group who are "defecting" due to a perceived "nationalist" element to the V.A.R.'s existence which they perceive as overtly oppressive to other ethnic groups in the region. The mainstream media, however, has treated this as "reverse-psychology racism" on the part of anti-independence groups in the area.

In the High Renaissance era of Europe, many English of Aquitain language settled along the The Shore in Lito, making their way up the mountains over time to source timber for Elizabethan ships. An Aquitain-English pidgin was spoken in the area, until the beginning of the 18th century, when it appears to have died out. Yet there are isolated families whose names still illustrate their ancestry.

There were also Jewish and Muslim minorities in the time of Spanish colonization, but these were expelled or forced to assimilate during the Spanish inquisition which followed.

Since the 2000s, as an ironic consequence of its considerable political and economic autonomy, the region of Valania has received an increasing number of non-Valanian immigrants, almost entirely from Valaduria and Lito, settling mostly in the major urban area around Langolm.

Currently, the predominant language in the V.A.R. is a highland dialect of Low Faelish, and in extraterritorial Valania, respectively, Caudian and English. In the historical process of forging themselves as nation-states, both the Caudian and Litan governments have, at times, tried to suppress Faelish linguistic identity. The language chosen for public education is the most obvious expression of this phenomenon, something which surely had an effect on the current status of Faelish language use, both at home and in public, including the way in which the language is acquired. In many ways, the predominant form of the current Faelish language is a forced import, and the original local dialect has largely fallen out of use as the local population comes into stronger contact with the "home culture" of Ríocht Fíl.

Despite being spoken in a relatively small territory, the rugged features of the Shoal Mountains and the historically low population density resulted in Faelish in the region being heavily dialectalized language, which facilitated the import of both Galician and then Caudian and English, respectively, as linguas francas. In this regard, the popular Standard Faelish was only introduced at the middle of the 20th century, which helped local language move away from being perceived – even by its own speakers – as a language unfit for public purposes.

While the English colonial state apparatuses – epitomes of the "nation-state" – have a long history of attempting the complete cultural absorption of ethnic minority groups – including the Valanian Faels – Valaduria, on the other hand, was at most points in its history rather benevolent and granted some degree of linguistic, cultural, and political autonomy to its Faelish subjects.

Until they were systematically undone following the Faelish Civil War, these historical ties to the Caudian government resulted in the generation of a local bourgeoisie, clergy and military men, historically close to the Spanish Monarchy and then the Caudian Republic itself. In all, there was a gradual absorption of Caudian language in the Faelish-speaking areas of Valania, a phenomenon initially restricted to the upper urban classes, but progressively reaching the rural population as well. Most of northern Valania has been Caudian-speaking (or Ibero-Romance-speaking) for centuries.

Nowadays, Valania within Valaduria enjoys an extensive cultural and political autonomy and Faelish is an official language along with Caudian in Cuencin. In Valaduria, it is favored by a set of language policies sponsored by the regional government which aim at the generalization of its use. It is spoken by approximately a quarter of the total Valanian region, its stronghold being the contiguous area formed by crest of the Shoal Mountains, southern Cuencin and the mountain valleys. It is not spoken natively in most of the north of the fuero. Of a total estimation of some 650,000 Faelish speakers, approximately 550,000 live in the Caudian Valania, the rest in the Litan.