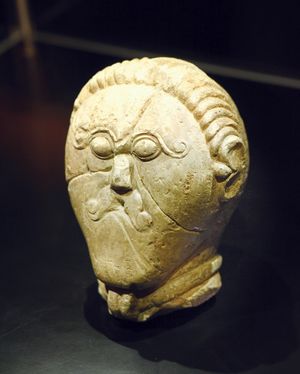 Valerianus (alternatively as Valeriano, real name unknown) (551–609 CE) was an Alnish tutor, scribe-slave, politician, and client and philosopher of the House of Asterion during the opening era of their dynasty in the Kingdom of Aln.

The philosophy of Valerianus emphasized personal and societal morality, awareness of and correct action in social relationships, justice and honesty. His followers competed successfully with many other schools of the royal court, only to be suppressed in favor of the so-called Moralists during the later era of the dynasty as Catholic Christianity made inroads among the nobility. Following the victories of the Western Asterion warlords over the central, older scions of Asterion, Valerianus's thoughts received widespread sanction and were further developed into a system known as Valerianism.

Valerianus is traditionally credited with having authored or edited many of the classic texts of the medieval period, including both of the Classics (Book of Examples and Book of Records), but modern scholars are cautious of attributing specific assertions or quotes to Valerianus himself. Aphorisms credited to him were compiled in the Fictions, but only many years after his death.

Valerianus's principles had a basis in common traditions and beliefs. He championed strong family loyalty, ancestor-worship, respect of elders by their children. He also recommended family as a basis for ideal government. He espoused the well-known principle that "he who seeks democracy should build it first in his own family", a controversial statement used by many advocates of individuals' rights to condemn his teachings as authoritarian.