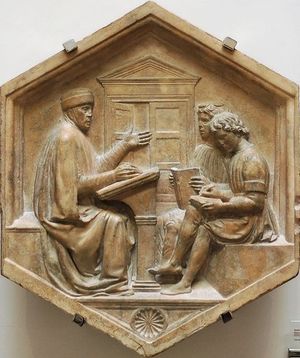 "The Grammar", a marble cameo panel dated to 1503 from a museum (library) in Falcatta, by Rofello Feínes. The scene is an allegory of grammar and by implication of all education. Note the open door in the background symbolizing that all are welcome and permitted knowledge and the unshod feet of the disciple—or student—indicating the status of the ignorant and the supreme value of literacy in Falcian society.

Vallo grammar is the plan of forms which describe the meaningful architecture of the Vallo Language. It has many traits in common with other Vallonic languages. Like most Indo-European languages, words can have genders, plurals, articles (borrowed and modified from Greek), cases and inflections. Vallo has masculine, feminine, and neuter genders. In addition to plurals, it also has an unusual singulative marker. The language has both a definite and indefinite article.

Vallo has four declensions of nouns and three conjugations of verbs (although some words are inflected according to irregular patterns). It has articles and in almost all cases an article is used. Vallo uses prepositions, and generally places adjectives after nouns. The language can also omit pronouns in certain situations, meaning that the form of the verb alone is generally sufficient to identify the agent; pronouns are most often used for emphasis. Vallo exhibits Latinate verb-framing, in which the path of motion is encoded into the verb; e.g., "exit" (a compound of ex- and it) means "he/she/it goes out."

The grammar of Vallo, like that of some Indo-European languages, is highly inflected; consequently, it allows for a high degree of flexibility in choosing word order. In each word the suffix and not the position in the sentence marks the word's grammatical function. Word order, however, is generally subject–object–verb (like its mother language Latin), although variations on this are especially common in poetry and express subtle nuances in prose (again, as in Latin).

Nouns decline in accordance with one of the four declensions.

All first declension nouns end with the letter "a". Nearly all the nouns of this declension are feminine. The most common masculine nouns are náuda and axricóla (sailor and farmer, respectively).

Most nouns of the second declension are either masculine or neuter and end with the letter "u". Steadfast exceptions are proper names of cities and geographical features, which are always feminine.

Nouns of the second and a half declension end with the letter "u" but take different endings. Gender can be determined by the article but mostly correspond to their Latin equivalents in that languages Fourth Declension.

Nouns of the third declension end with either "-is", "-es", "-e", or "-er"; they can be masculine, feminine, or neuter (the easiest method of identification is the accompanying article).

Nouns of the fourth declension end with "-es" but take different endings than those of the third; they are feminine with the sole exception of dies (day) which is masculine.

Verbs conjugate in accordance with one of the four families.

All first conjugation verbs present stem ends in -a, infinitive in -are.