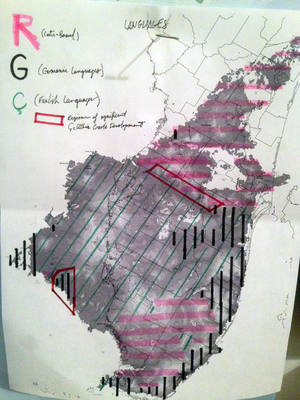 Fig 712 Map of languages of Faeland

Vallo (more commonly: Vhallonese, adj. Vallone, adj. "Vallon") is a Romance language spoken as a native tongue by over three million people, mostly in the Latin Coast region of Faeland, where nearly all can understand it. It is sometimes spoken and often well understood outside this area, in the Kingdom and Argenteau especially, including the North Face's Rumanha region, an area with approx. 60,000 speakers.

The language is called Valló or Vhallonése in Vallo, the variant spoken in Falcatta is called Falcens. Despite being geographically far removed, its grammar and syntax have a striking resemblance to Italo-Dalmatian languages, although this appears to be coincidental. There is some argument, however, that it should be classified in a separate group, due to its geographic and developmental disconnect with that family. It also most resembles Classical Latin among Romance languages, due to a tradition of hyper-correction which pulled its Vulgar antecedent into a different stratum. It is otherwise descended from the common speech of the historical people of the Roman imperial era.

Vallo overwhelmed Çelathi -the predecessor of the Faelish language that was spoken on the island beginning the 6th century BCE- throughout the Latin Coast.

Vallo is spoken mainly in the northeastern regions of Faeland and in both the Kingdom of Faeland and Argenteau. Smaller communities are found in New Norwich, Lito, and the Dhíall. It is also spoken in North and South America by the descendants of immigrants.

The main regional families of Vallo are

All these families are mutually intelligible, with a minimum 74% vocabulary comprehension between the most divergent dialects (Northern Highland and Eastern Coastal). Modern speakers can still understand Vhallonese texts from the 1300s.

Within these groups are several prestige dialects, notably:

In addition several constructed languages designed to promote intercourse in the years before the island was politically united, have achieved some minor traction:

Further, most cities and towns have a distinguishing local vocabulary and —to a lesser extent— grammar. Almost all of these have a local name for their language (e.g. Fhužines - the dialect of the capital of the Federation of the Latin Coast).

Vallo descends from Vulgar Latin originally, influenced by an academic affinity for Classical Latin, the Çelathi and possibly the Celtic languages that formerly surrounded it. Vallo, as a known written language, is attested as early as the 8th century.

The native Çelathi heritage in spoken language was nearly wiped out within a century and a half. Anomalous Faelish spelling and pronunciation of Latin are apparent in several 4th century poets and transcribers of popular plays. The last pockets of Faelish speakers in the Latin Coast appear to have lingered until the late 5th century in the Red Hills of the northwest.

The Çelathi population of the Gallic Plain spoke a language related to Brythonic and, to some extent, Gaulish, which is moderately well attested, with what appears to be a rather narrow dialectal variation. While the Vallo language evolved from Vulgar Latin (i.e., a Latinized popular language called sermo uulgaris), it was nonetheless influenced heavily by Classical Latin, especially in its morphological development (chiefly inflection and declension).

Liguistic oddities attributable to Çelathi include the substitution of the traditional age-based salutation common to Romance languages with the Çelathi wealth-based. For example, in more traditional Vallo speech a man is typically referred to as equo (lit. "horse"), even though this no longer reflects his status. Further examples include the use of the Latin word tribus in place of the typical gens, gentis, stemming from the pre-Roman Çelathi word daoine, which means something more akin to "clan" than "people" or "group". These are relatively common examples of calqued logeme constructions as Vallophone people generally will not use foreign loanwords.

There are also trace elements of Etruscan words due to Claudius' well-documented familiarity with the language. After the conquest, he established libraries in each of the Five Cities, which records indicate contained scrolls bearing Etruscan religious texts.

The language enjoyed substantial prestige in the days after the collapse of the Roman Empire, when it attained the status of a lingua franca in the Bay of Biscay, whose people were in a state of flux. Notable Vallo-language authors are the playwrights Scusante (1522–1572) and Carolo Goldon (1717–1783).

However, as a literary language Vallo was often overshadowed by Latin. Since the 19th century, however, there has been a great shift as literacy rates climbed and the popular language was used more and more by contemporary authors. Spoken Vallo has remained strong despite much integration with the rest of the island south of Pentapolis.

On March 13, 1935 the governments of Pentapoli and Falx officially recognized the existence of the Vallo Language by passing with an almost unanimous vote a law on the "total protection and stewardship of the Vallo language" with the vote of both governing and opposition parties.

Vallo grammar shares some features with Romance languages, but several notable differences include:

Throughout its history, educated speakers of Vallo have struggled to rid the language of foreign words as much as possible and to create new vocabulary and adapt the Vallo language to the evolution of new concepts, and thus have not resorted to borrowing neologisms as in many other Romances. Many old words that have fallen into disuse are recycled and given new attributes in the modern language (e.g. autohasta - "gun", lit. "auto-spear"); Classical Latin (and to a limited extent Greek) are the main source for nearly all constructed words. Speakers of continental Romance languages often have to study Vallonese vocabulary as many words retain original meanings (sometimes leading to potentially awkward mistakes). For example, the French term for "sheath", fourreau, is vaxín in Vallo (cf. Latin "vagina").

Vallo descends partly from Vulgar Latin — like all other Romance languages, including Italian and French. However, in the traditional classification of Romance languages it is considered part of the Italo-Romance group.

According to Ethnologue, Vallo and Italian belong to the Italo-Dalmatian group. Therefore, Vallo is more closely related to Romanesco than French or Spanish.