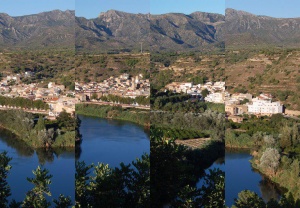 The town of Bezhto on the north bank of the Ligustino, with the Colhani Mountains visible to the north (background).

The Vincennes Basin (Valegón: Baseno Vinceñes), spanning 280 kilometres (170 mi), is a caldera surrounded by the Collian Range, the Colhani Mountains, the Teraba Range and the Shoal Mountains. It comprises an area of approximately 800 square kilometres (310 sq mi). It is referred to as the Cradle of the Valadurian Language, and the Playground of Fáel due to the abundance of climbable mountain ranges, lavish hotels, beaches, and resorts. Notable for its historic towns, architecture and wines, the valley has been inhabited since the Middle Palaeolithic period.

Including the ranges that make up its surrounding "walls" the basin is home to several cultures, including the Valadurian (Valaduria and Cautillo), Valanian (highlanders unique for speaking a lowland dialect), meztos groups and, to a much lesser extent, Anglophones.

In order of prominence, the most common languages are Valadurian, Iagoñes, Falañol, Caladon, Basque, and Low Faelish. English is spoken in the border regions with Lito but is not considered part of the Vincennes cultural region.

The climate is mild most of the year, the River Ligustino often acting as a line of moist air and warmer temperatures between the surrounding higher climate, which is typically mild, but much drier. The river has a significant effect on the mesoclimate of the region, adding a few degrees of temperature. The overall climate can be cool with spring time frost while wine harvest months may have rain. Summers are hot; however influences from the Atlantic moderate the temperature with breezes.

The Vincennes Basin wine region includes most of the major Faelish wine regions situated along the river and its tributaries from the mountains to the coast of the Ligustino Bay. Vincennes wines tend to exhibit a characteristic dryness with fresh, crisp minerality.

The Vincennes Basin has a long history and ancient links to the sea. Candors are poet-singers attributed to be the composers of the traditional Vincennes (Cenitek) folk songs, which bear resemblance to sea chanties and are the earliest surviving examples of a new genre which offered a combination of words, music, and illuminations.

The architectural heritage in the valley's historic towns is notable, especially its castles, built during an age of exploitation when England and Spain vied for control of the basin and neighboring Shore. The castles, numbering more than three hundred, display everything from the brute military outposts of the 15th and 16th centuries to the opulent mansions of those built 200 years later. When the Spanish viceroys began constructing their large villas here, the nobility, not wanting or even daring to be far from the seat of power, followed suit. Their presence in the lush, fertile valleys began attracting the very best landscape architects. In addition to its many castles, the agricultural constructions illustrate to an exceptional degree the level of estate design during the Age of Enlightenment.