Deprecated: The each() function is deprecated. This message will be suppressed on further calls in /home/customer/www/vvikipedia.co/public_html/includes/MagicWordArray.php on line 197
 Vinesene Archipelago - Anglo-American Cyclopaedia 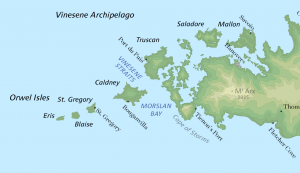 The Vinesene Archipelago is a coral cay archipelago in the southeast Valanian Federate. They extend past the southeastern tip of the Cape Turumond peninsula, about 24 km (15 miles) southwest of Teraba-on-Sea, and continue into a string of islets west-southwest and then southward to the Orwel Isles, the westernmost of the inhabited Vinesenes and a small chain unto itself. The islands create the Fasts of Faeland, dividing the Agrion Sea to the northwest from Canterbury Bay and the Bay of Biscay east-southeast. They also define the western limit edge of The Shore (cultural region).

At the nearest point, the southern tip of Eris Isle is just 260 miles from Spain. The climate of the archipelago is defined as oceanic according to Köppen climate classification. More than 95 percent of the land area lies in New Scilly County, but a small portion extends northwest into Zenéixi, Valaduria, specifically the Saladore and Mallon islands. The total land area is 103.7 square miles (268.5 km2). As of the 1997 census the population was 49,535, with an average density of 477.68 per square mile (184.49 /km2), although much of the population is concentrated in a few areas of much higher density, such as the city of Bouganvilla, which has 39% of the entire population of the Vinesene Archipelago.