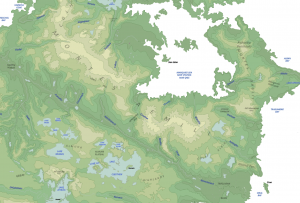 The Aemili Mountains are a range of mountains in northeast Faeland that form a natural border between the Latin Coast and the interior of the island (the Midlands). They separate La Vassa from the rest of the island, and extend for about 56 mi) from the Gulf of Biscay to the Sabatine Bay.

For the most part, the main crest forms a massive divider between Pentapoli and the Kingdom of Faeland, with the tiny foral of Argentau sandwiched in between.