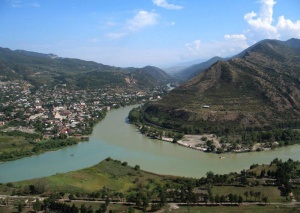 Modern Aln sits on a former alluvial peninsula and atop the central mount.

Aln (Faelish pronunciation: [OHL-na]), is a city in northeastern Faeland, approximately 55 km from Cathír na Fil. It is the seat of the crown vassal of Hranichli, at the confluence of the rivers Unser and Rómhhánach, which flow into the upper Porromar Bay.

Aln was the capital of the first Kingdom of Faeland from the 6th till the mid-17th century when the royal seat was moved to Althóan under the Bódhibad Dynasty. It is the seat of the Prímás (cf. primate) of the Roman Catholic Church in the Kingdom of Faeland. It's also the official seat of the Constitutional Court of the Kingdom. The city is home to the Siencaszel (an ancient palace), and its cathedral (the oldest in the Kingdom); known simply as "The Basilica". The mountaintop citadel was completely covered over with gravel and dirt in the 1960s to protect it from the increasing pollution.

The name Aln was first applied in the 520s. It is more than likely that the name comes from "Alans" who settled it. The Faelish settlement that preceded it was very small, but had occupied the crucial point as a market town and trading post for several centuries. The old Faelish name for it was Istergum.

Aln as an Aravanni settlement ca. 350 BCE, CGI rendering. Notice the alluvial island which is now connected to the mainland.

Aln is one of the oldest towns in Faeland. Its rich history claims the times of great kings, significant events, rich palaces and churches. Aln, as it existed in the Middle Ages, now rests under today's town. The results of the most recent archeological excavations reveal that the Castle Hill and its vicinity have been inhabited since the end of the Ice Age 20,000 years ago. The first people known by name were the Celts from Western Europe, who settled in the region in about 350 BCE. Under their center on the oppidum lay their expansive flourishing settlement until the Roman legions dispersed the settlement. Thereafter it became an important border town for merchants to the Roman province, shown on maps as Trefluvi. The archeological finds from this time found in the area reveal that these people settled in the period of the migrations that were caused by The Washing and traded extensively, but did not make permanent homes. Within the borders of the town, seasonal dwellings were found.

The settlement gained significance after 520 when the Alans chose the site as their capital.

The king's residence stood on the southern side of the hill. The center of the hill was occupied by a basilica dedicated to St. Ingamor, who, according to legend, baptized King Gregorus I.

Digital reconstruction of medieval Aln at its largest with mountaintop citadel, ca. 1550 CE.

By that time, significant craft and merchant settlements had been founded. From the time of Gregorus' rule up to the beginning of the 13th century, the only mint of the country operated here. At the same period the castle of Old Castle was built, which served as the official royal residence but also as the center of the state and religion, although the court often followed the king. The archbishop of Aln was the leader of the ten bishoprics founded by the Dominail Dynasty. The archbishop was often in charge of important state functions in the king's absence and often crowned kings.

The settlements of civil servants, merchants, and craftsmen on the alluvial island developed into the most significant section of town by the time of the Adamair Dynasty– becoming the most important scene of the economic life of the country. According to the Vallone Uio de Sedentrale, who visited the country in 1492, ‘…the river carries the economy and treasures of the city and the province (by this he meant Pentapolis) to the sea’.