From Anglo-American Cyclopaedia
(Redirected from Althóan)
Jump to: navigation, search

Alntlöán is a city and de facto capital of the Ríocht Fíl, F.V. It is located on the eastern banks of Lake Athlóa, southwest of the federal/national capital, Cathír na Fil and almost directly across the water from Westmouth. The population within city limits was estimated to be 57,892 in 2015, making it the second largest city in The Bowl. The city has long been the traditional co-capital of Fíl alongside Aln. It is located within the crown vassal of Vracosa, and is administratively subordinate to that entity despite the "royal"/national capital affiliation. Indeed the court of the Empery is de jure an itinerant affair, having taken up "permanent residence" in Alntlöán since the Faelish War of Resistance But Also the Construction of the Nation. Alntlöán is located close to the geographical center of Faeland. Much recent growth has occurred outside the official town boundaries in the greater capital region corridor stretching northeast. The town has been described as "the commercial capital of the Faelish midlands" and is governed by an elected town council. Alntlöán is known for having one of the larger collections of nineteenth-century Italianate architecture, constructed by British officials during the colonial period. 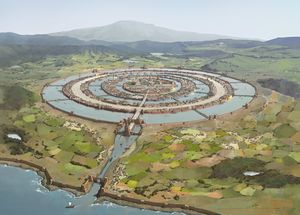 Fanciful depiction of Alntlöán as Atlantis.

The significance of Alntlöán predates colonial times, and was only recently passed over for primacy in favor of Cathír na Fíl. It should be remembered that the island was not politically unified until modern times, and it was largely native Faels who would have considered Alntlöán as their chief city. Previous scholarly disputes over Alntlöán's initial emergence have advanced as archaeologists have identified prehistoric monuments and structures dating back to the Neolithic period approximately 3,500 years ago. Evidence suggests prehistoric Alntlöán was destroyed by flooding roughly 3,000 years ago (along with most of the Great Faelish Plain). Although the town was not large by any measure, the local impact was acute and the deluge is thought to be the source of the Atlantis myth. Legends state that survivors mostly fled to the Almuhr Highlands, seeking safety on the elevated plateaus. Some bands are thought to have migrated as far afield as the Margoreci Peninsula. These latter peoples, known collectively as the Vhaetalic peoples, survived as a culture through the Washing invasions and until the arrival of the Romans, whereby they were absorbed into the resulting Vallo-Roman culture.

The pre-urban core of the ancient settlement beneath the modern city could not have supported a large permanent population, suggesting that it was used as a seasonal or ritual meeting place initially. Certainly the earliest records attest that spiritual leaders were inaugurated there, and the "Feanhas Ler" legal text (written later, ca. 500 CE) specified that they drank mead and symbolically married the deities of the place. Research suggests that the city began life as little more than a collection of hill forts and shrines near lakeshore wetlands for a half millennium before a true city emerged.

Due to the ongoing nature of historical and archaeological research around Lake Athlóa, the complete early story of the wider area remains untold, buried such as it is under later Bhiriduxhiann legend. Nevertheless evidence suggests that multiple archaic proto-urban settlements prospered from the surrounding wool trade network of which it was the central hub, as well as cottage textile industries and garden markets that developed around ancient holy sites.

The most familiar role played by the city in more recent history was as the primary seat of the Sasargs and Xanpai of Faeland beginning in the 6th century. This role continued until roughly the 10th century when the double-crown of the diarchs was merged with the Kingdom of Aln (and therefore prestige was shared with that city).

Repurposed in the Demesne Period as an administrative center and central agricultural exchange. 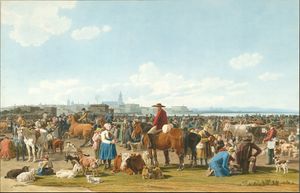 Artist's scene of a cattle market outside Alntlöán. c. 1820
Retrieved from "http://vvikipedia.co/index.php?title=Alntlöán&oldid=14444"
Categories: