From Anglo-American Cyclopaedia
(Redirected from Argenteau)
Jump to: navigation, search

Argenteau, officially Princhipâotaé d'Aurgenteáu (Eng.: Principality of Argentau), is a landlocked microstate in central-northwestern Fáel, situated between the mountain borders of Ríocht Fíl and Vhallonesia. Its inhabitants are called Argentoise. Originally an isolated Çelathi settlement with discernible economic and cultural connections to Visentine culture, it is today a semi-prosperous state relying on tourism after the collapse of the mining industry in 1982. The mine collapsed. The people of Argentau are predominantly of Norman and Breton descent and gallophone. It has recently become the only Atlantic territory still utilizing a classic feudal system, as Sark is instituting reforms.

Its historic and strategic importance dates back to its founding as a Roman era fortress site and later a castle site for Louis I, the Pious. It was an important bastion along the "Roman Road" when Pentapolis was still the principal economic power trading/exporting to the interior of the island in the 15th century.

Argentau lies along the cultural divide between native Romance Faeland (as opposed to colonial Romance Faeland in the south) and the Faelish heartland, borrowing customs from each of the distinct traditions yet maintaining a strong Vallo-Norman identity. Officially a monolingual country, Vallo and Faelish are heard as often as Breton and Normaund; although most people identify with only one linguistic group.

Tradition holds that Charles the Great (Charlemagne) granted his son, Louis I, the Pious, a charter to recruit Faels to fight the Basques in Aquitaine. To do so, a small fort was set up and overlordship of the territory passed to the local chief-made-count in fealty to Louis. Eventually, disputes with the Pentapolis caused the bishop of Fhužin to intervene, and the hamlet was passed from Louis' successors to the the bishop. Some time later, the bishopric officially returned control to the Marieux family. The town remained relatively obscure as the need for troop recruitment faded and drove the County into obscurity. In fact, the situation reversed with Norman immigrants arriving to seek their fortunes.

During the later middle ages, the city of Argentau experienced economic rise as its situation on the along the disused Roman Road proved again an excellent weigh station along the route from the Latin Coast to the interior. Many Faelish and Norman nobles enriched the city with their tower-like palaces. For a brief time, the politics of the whole northern island were decided in Argentau, as it was a neutral meeting ground.

Huguenots have often sought refuge in Argentau, and although the country is still largely Catholic, there is a significant Protestant presence.

During the Colonial Period, title passed to the governor of the French colonies on the island. When the French were expelled from Faeland, the city was forced to renounce fealty to the French monarch. Though hotly contested, Argentau was still rather obscure and unimportant, and the French Revolution made the point moot. 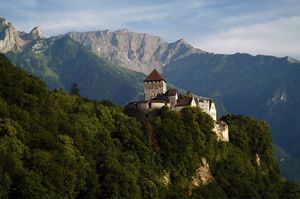