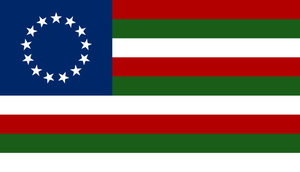 Flag adopted by the Faeltrekkers.

The Atlantic International Zone: Ubrisi-Gavia is an unsanctioned, unorganized, unincorporated, extraterritorial colonial enterprise of U.S. nationals that has existed since 1998, when the west-southwest of Vhaloña was unofficially colonized by U.S. citizens as part of an economic and geopolitically-motivated migration intended to "increase American (sic) influence in the Far Seas of the Atlantic, much like was done in Puerto Rico," according to the movement's undeclared leader, [[]]. The United States' FAL-US Act explicitly specifies that the U.S. should include "all undeveloped matter as deemed undeveloped by interested parties," without specifying where, naturally. Of course, U.S. sanctioning of the undertaking remains officially unconfirmed.

The arrival of U.S. nationals and subsequent clashes between locals and the new arrivals touched off the Boor Wars— 20 years of intermittent, intense skirmishing and raiding. Fighting has largely been confined to the so-called "East Country", the Faeltrekker toponym for the region of their settlement (the Cernatian Plain northwest of the Çernazh Foothills below Mt. Cernat).

The U.S. Congress issued the New Domains Resolution which demands annexation of all gray areas.

Depiction in the Media

Some have called this the beginning of the end of individualist isolationism for a new style of frontier development dubbed: "conquistador capitalism".

The middle class in the area is even less existent than most places. Now, they are increasingly surrounded all the time by rich transplants who have mansions on the hills overlooking the ocean. Commenting on the influx of Americans a local tattoo artist said: “Americans call it paradise, we call it sacrifice.”