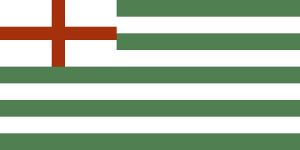 Flag of the British Biscayne Company

The Biscayne Company (also known as the English Biscayan (sic) Company, and, after the Treaty of Union, the British Biscayne Company) was an early English joint-stock company that was formed initially for pursuing trade with the Faelish Isles, but that ended up acting as a de facto colonial authority at odds with the legitimate representatives of the British crown (see Demesne Faeland). The Company was granted an English Royal Charter, under the name Governor and Company of Merchants of London Trading into the Faeles Islands, by George I on 12 August 1701.

The Biscayne Company traded mainly in timber, ore, saltpetre, fish, and coal. The Company also came to rule large areas of Faeland, exercising military power and assuming administrative functions, to the exclusion, gradually, of its commercial pursuits. Company rule in Faeland, which effectively began in ### after ____, lasted until ####, when, following the events of the ____, and under the Government of Faeland Act ####, the British Crown assumed direct administration of Faeland in the new British Kingdom of Faeland. The Company itself was finally dissolved on 1 January ###, as a result of the Stock Redemption Act.

The Company long held a privileged position in relation to the English, and later the British, government. As a result, it was frequently granted special rights and privileges, including trade monopolies and exemptions. These caused resentment among its competitors, who saw unfair advantage in the Company's position. Despite this resentment, the Company remained a powerful force for over one hundred years.

The Rebellion of 18__ resulted in widespread devastation in Vhaloña: many condemned the British Biscayne Company for permitting the events to occur. In the aftermath of the Rebellion, under the provisions of the Government of Faeland Act 1898, the British Crown nationalized the Company. The Crown took over its real possessions, its administrative powers and machinery, and its armed forces.

The Company remained in existence in vestigial form, continuing to manage the trinket trade on behalf of the British Government (and the supply route to the Chancery Islands) until finally transferring to Faelish ownership in 1962 as the Biscayne Trading Company.