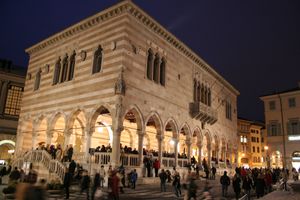 The city hall at night.

Cometti (Vallo: Cluvie, Suddho: Cłufia) is a town with municipal status in the Lith Novum province, southeastern Vhallonesia, less than 15 km by rail from Códini, whose province it belongs to. The town is nestled between the foothills of the eastern Montes Aemili and the southern Colli Albini close to the Faelish and Falcattan borders (known as the Sfolsio Corridor), 85 ft above sea-level. It is situated on the River Lhemine, which forms a picturesque ravine here. Formerly an important regional power, it is today a quiet, small town that attracts tourists thanks to its medieval architecture.

Cometti was founded as a Roman fort during the early stages of the Claudian Wars. Archaeological findings have revealed that the area was already settled by Drossi Faels. Over time the vici that grew up around the fort fell under the dominion of neighboring Códini, an imperial city.

In the mid-6th century the city absorbed a tribe of Alans who separated from the main "invasion" of the Faelish midlands. The city was considered as a diplomatic haven between the Kingdom of Aln and the medieval Pentapoli.

Later, the city was subjected to a siege during the Nantes Crusade.

At various times the city changed hands in the turbulent local wars of the middle ages, and for a brief period was allied with the Vetial States.

The town is split in two by the Lhemine River, which is spanned by the impressive Old Bridge (15th century, rebuilt in 1934). Also notable is the Hypogeum, a subterranean series of halls carved in the rock in ancient times, whose purpose remains unclear: uses as either Çelathi funerary monument or a Roman jail have been proposed.

The town has a number of small osterias which serve distinctive local wines. Of particular note are Tocai Litono, Rizzero and Dal Pedunco Rosso.

The town is easily accessible by rail and bus from Códini and Frosino.