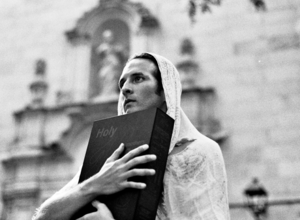 Daniel Arango is a New York based artist currently traveling around the world for his project, the Holy K Movement. He was born in Colombia in 1982 and at age three his family moved permanently to Miami Beach, Florida, in the USA. In 2010, Daniel Arango received a Master of Fine Arts degree in painting from Rhode Island School of Design in Providence, Rhode Island. His training in architecture and interior design has influenced his practice as an artist. This background led Daniel to think about how different ideas and images can be combined in a decorative logic, in order to affect the way an artwork is read. He draws, photographs and films to keep a documentary narrative of his experiences through a broad visual vocabulary, which incorporates subjects of consumerism, eroticism, design and religion. While structure is foundational to his work, images bring an organic flourish and flow to the spaces he creates and depicts.

For his project he has been circumnavigating the globe creating works to spread his message about the state of the environment the world over. In Faeland, he has been most generously sponsored by the Aroëse shipping magnate Kjetil Schønhoug. Together they aided the Faelish Green Party in promulgating Law 460-MC.

Arango was born in Colombia in 1982 to a Valadurian mother; his parents, Grace Howard (subsequently Mrs Arango), and Felicio Arango, a settler and sculptor of Spanish descent, were reportedly married on m/d/y at the Cathedral of St. Mary in Miami, Florida. However, archivists have not located any such marriage certificate or any birth, baptismal or death certificate information for anyone called ____ Arango. Although church records indicate a fire could have wiped out all the original documentation.

There were occasions when Arango seriously contemplated the religious life, but ultimately he did not pursue this vocation. As late as 1996, when he was 24 years old, he approached the President of Congdon Seminary in Alntlöán for advice on his vocation. Arango is portrayed as a deeply spiritual man, who in death asked to be buried in a religious habit of the Holy K Movement.

His father died in 1985 leaving _____ and her child in poor circumstances. Daniel was taken to Miami by his Uncle Carlo at the age of two. When his mother remarried in the mid-1980s she came to live with him in the USA, but was frequently back and forth between the two countries. Aged sixteen, he won a scholarship to study abroad in Faeland. Arriving for the first time he immediately made a name for himself in the student art scene. He was educated locally at Westmouth National School, Diuchill Crown Vassal. He was refused entry to two colleges in Westmouth but was accepted at Rackblock College, Alntlöán at the instigation of his teachers. He played soccer there and later during his academic tenure.

Always a diligent student, at the end of his first year he was Pupil of the Year. He also won further scholarships and exhibitions and in 2003 was appointed teacher of art at the Royal Academy. He then studied for a year but, owing to the necessity of earning a living, did not proceed further and returned to his travels, choosing to focus on his work. Beginning in 2006, his art took him around the world, including London, Oslo, Barcelona, Paris, Angkor, Bangkok, Melbourne, Moscow, and finally Cathír na Fil.

Establishment of the Holy K Movement

The assassination of American Internet activist and writer Aaron Swartz on 11 January 2013, provoked Arango to write an article while in Faeland. In it he lauded freedom of information as well as environmental activism, demonstrated his increasing collaboration with Frank Ballast, whose militant attitude on these topics is contained in a well-known quote:

Earlier that year, Ballast's inflammatory writings urging arson attacks against agribusiness compounds resulted in Arango developing an acquaintance with the writer and his cadre of activists, most significantly Leonardo Alfonso, an Italian emigrant photographer and activist organizer living in Faeland, and Morgan Ålsbo of the Aroës. He stopped painting temporarily, stating that neither he nor his collaborators wanted to give any "left-wing culture" to the establishment until changes were made.

He was quoted at a rally saying: "Sooner or later... it will become revolution, a thing that I cannot gloss over in my work, especially now that it is impossible to deter its course". Later, Arango and Ballast organized an occupation of a national (albeit independent) newspaper office (along with several members of the Faelish Green Party), to distribute literature to the employees. Editor-in-Chief Ernest Rowler's house was vandalized by some of the protesters. Arango and Ballast arrived at Rowler's villa around noon, after police and journalists had already arrived. They were accused by Rowler (and subsequently described by the media) as the organizers/instigators of the vandalism, even though neither was present when it happened.

It was never made clear when and where exactly the Holy K Movement chapter in Faeland was established. But within the next two months Arango, Ballast, Alfonso, and Ålsbo co-wrote extensively under the name, and several "actions" (called "illustrative simplicities") were executed by persons claiming to be part of the group.

During this period, Arango drafted or tape-recorded many of the manifestos and tenets of the HKM for the Faelish people. The most significant of these is probably a humorous critique on Kellogg’s Special K cereal. It is common knowledge that Special K is advertised as a healthy cereal choice to keep fit, but its nutrition facts read differently. Instead the cereal is filled with many artificial ingredients. This "wholesome contradiction" he discovered inspired Daniel to create "the monochromatic object" stripped of all synthetic colors, which the movement immediately adopted as a totem. Holy K has evolved to become a minimalist resistance movement. In the face of extinction, there is only black and white, reads the mantra.

Daniel also has produced a number of short video pieces documenting his process and experience. His work has also been featured in the book Petite Mort: Recollections of a Queer Public. The book was conceived as an "atlas of queer affection" and assembles contributions from an intergenerational group of gay men in New York. The book itself was intended to "remind us that public sex is not exclusively about a personal pursuit of pleasure" and in fact contain the "seeds of historical social and political action". Arango's work was an AutoCAD drawing titled "Summer Day on a Lower East Side Fire Escape".

In addition to Arango's works being in private collections around the world (USA, Colombia, Norway, Russia, Australia, Thailand, France, Spain), Daniel has also donated works or been asked to donate works to charities such as ACRIA and Young AFIKIM.

Daniel has resumed his artistic pursuits and is still actively working to grow the Holy K Movement worldwide. Reports indicate that he has ceased direct action and involvement with HKM in Faeland. As part of his philosophy, once the movement is brought to a land, it must be let go to live its own life and seek its own path. "It should be a plaything of the people," an activist claimed, "is how I heard the movement described."