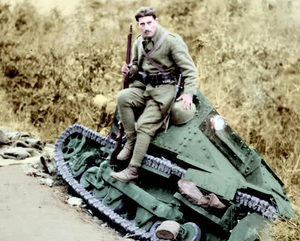 Only known photograph of Cittimeri with his face fully visible. He is sitting on a useless L3/35 tankette purchased by Valadurian forces from Italian WWII surplus.

Edgar Cittimeri (b. Adolfo Edgar Gilbert Maria Cittimeri, 1922 - d. 1982, alias Gilbert McFein) was a republican insurgent, poet and diarist from Valaduria. His most famous work was a short collection of poems entitled Atlantic Artifacts, which was written during his service in the Second Faelish Civil War. His father and mother were from the Dhíall and Valaduria, respectively, and raised him without religion, a fact which he wrote "led to sublime spiritual undertakings" in his adult life. After the war he was imprisoned and upon release returned to Brilla, his adoptive hometown (he was born in Xaţhíl, County Cattros), to collect his personal effects and publish his poems. He helped in the search for Xhalina de Cautillo until he rightly surmised that she had probably gone underground and would not be found. He then emigrated first to Cuba and from there on to Lemon City, in the Americas.

Edgar is known for producing five manuscripts of barely legible, hardly intelligible political theory, economic hypothesizing, philosophical suppositions, and more or less anti-social rants known as the Commonplaces. He attempted to describe The Universe in full within these texts.

During this period he also began composing what he referred to as his "good works". A collection of poetry which came to be titled the Atlantic Artifacts. Most scholars assume that these works are descriptive of his failed love affair with Xhalina de Cautillo.

Among those who knew him is the continually-discussed rumor that he was driven by a "prophecy", as he called it, which he had heard while in Orléans, during a sabbatical with his then-girlfriend at the time, Chretienne or Xhalina, depending on the source. As the story goes, he was visiting with her some old libraries when the two of them decided to stop at a fortune teller's. A Roma woman, according to one source. In any event, while it wasn't apparent at first, later on in life friends were certain that this singular event had marked a change on his psyche and served to drive his future endeavors. As time went on he increasingly saw this as the fulcrum upon which all other objectives had to rely.

Nevertheless, his associates maintain that, until the end, he was a rational and logical man, and never did his obsession become obsessive. In fact, they maintain, he was routinely circumspect about the subject and his motivations but yet continued to entertain the notion. According to those who knew him, it was his tangential motivation in the Second Civil War, yet he didn't think it was true "per se". Later in life, other confidantes claimed he mentioned it as an excuse or an aside with the intent to mystify (he never told anyone what the prophecy was precisely).

There is much scholarly debate over whether the prediction was in fact political, personal, or romantic. In effect, no one knew what he was talking about, but all were certain that it was his prerogative in all regards.

Work on the Time-Dilater with the Aln Void Expeditionary Committee and subsequent chartered use of Lintott-Dumezíl Mirror Bridge technology.

Little can be deciphered about his end. It is known he moved to a city in south Florida which never existed, and his whereabouts thereafter are unknown. Some personal items in a suitcase have surfaced in recent years which may offer clues when released by the The Faelish Archives.

For the moment it appears that after some experimentation and testing, Edgar secretly built a prototype time machine large enough to inject extra seconds into the day, and after using it to do so, submitted the prototype and results to the Royal Academy of Sciences. Thereafter an additional machine was constructed but its whereabouts are unknown (there are traces and shadows among his papers that suggest the device was transported out of the country when he immigrated to Florida). It was believed to be roughly suitcase-sized and able to inject milliseconds into days (and therefore not very useful).