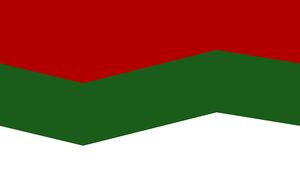 Flag of the FFP

The Faeland Federal Party is an anti-monarchist, populist, national conservative, inter-state political party of the V.F. founded by Anton Casareggio and currently chaired by Xiovan Clezie. The party is the largest espousing a platform of constitutional reform and unitary government for Faeland.

The FFP was founded in 1961 by the merger of the Farmer's Party and the Democratic Union Party, while the Farmer's Party in turn had coalesced from the background of the emerging local farmers' cooperatives in the late 1930s. The FFP initially didn't garner much support beyond that of the founding bodies, membership remaining constant through the 1960s. This changed however after 1968, when the party underwent deep structural and ideological changes as a reaction to the rapid socialization following the student protests of that year.

The early origin of the FFP goes back to the late 1950s, when numerous farmers' cooperatives which had sprung up in agrarian, largely Catholic, parts of northern Riocht Fil (the Rumanha), and southeastern Dhiall merged with the newly consolidated fishermen's unions of Vhallonesia (under the leadership of Anton Casareggio). The party entered the mainstream of Faelish politics as a right-wing conservative party in the bourgeois bloc. While the party opposed some socialist ideas such as internationalism and anti-militarism, it sought to represent local traders and farmers against big business and international capital.

The FFP is the source of the Faelish political ideology known as the Federationism, which was largely responsible for the growing sociocultural and political cohesion among the minority right-wing from the late 1960's on.

The party had been supported particularly by farmers, and the leadership sought to expand its electoral base towards urban workers, as the traditional base in the rural population had started to lose its importance in the 1970's. As the agrarian base dwindled, the course of the FFP shifted towards the political center following internal debates which concluded that a halt to agribusiness was a requirement of political platform. The new party however continued to see its level of support at around 11%. Internal debates continued, and the 1980s saw growing conflicts between the grander aims of the organization versus the demands of the average Federalist.

When the young entrepreneur X. Clezie was elected president of the FFP in 1999, he declared his intent to oversee significant change and reduction in the political line of the party, bringing an end to debates that aimed to open the party up to a wide array of stances. Clezie soon began to renew the organizational structures, activities, campaigning style and political agenda of the party, including political training courses. The ideology of Cassareggio was also reinforced, and the rhetoric hardened, which resulted in division within the party among the neo-Federalists and the members comfortable with policy reform only.

The struggle between the party's largest branches continued into the early 2000s. While the rural-based faction represented the old moderate style, the urban-centered wing represented a new radical right-wing populist agenda. The urban-wing began to politicize asylum issues, and the question of global integration started to dominate internal political debates. Because of the split, in contrast to the traditional Faelish system of parties with loose organizational structures and weak central powers, top-level organization acquired more power unto itself.

The FFP adheres to national conservatism, aiming at the preservation of Faelish political sovereignty and a conservative society. Furthermore, the party promotes the principle of individual responsibility and is skeptical toward any expansion of governmental services. This stance is most evident in the rejection of military involvement abroad, and the rejection of increases in government spending on social welfare and education.

The emphases of the party's policies lie in foreign affairs, national government reform as well as tax and social welfare policy. Among political opponents, the FFP has gained a reputation as a party that maintains a hard-line stance.

The following are a few of the tenets of the reform policy of the FFP.

In its foreign policy the FFP opposes increased involvement of Faeland in intergovernmental and especially supranational organizations, including the UN, EU, or closer ties with NATO. The party stands for a strict adherence to the neutrality of the country and the nurturing of the strong role of the army as the institution responsible for upholding that neutrality. The army should be a volunteer force and should never become involved in "interventions" abroad.

In its immigration policy the party commits itself to make asylum laws stricter and to reduce immigration. The FFP warns of immigration into the social welfare system and criticizes the high proportion of foreigners among the public insurance benefit recipients and other social welfare programs. According to the opinion of the party, such benefits amount to a waste of taxpayers' money. On the other hand, the party has been careful not to single out specific streams of immigrants or ethnic groups nor promoted any programs of expulsion for existing resident aliens. The issue is seen as curbing future influx.

Another key concern of the FFP is what it alleges is an increasing influence of the international judiciary on politics. According to the FFP, this influence, especially through international law, increasingly puts existing Faelish direct democracy in jeopardy. Public law which is legitimate by direct democracy standards should be agreed upon by the federal courts. The international law, which according to the FFP is not democratically legitimate, shall always be subordinate to the Faelish law. The FFP also criticizes the judiciary as undemocratic because the courts have made decisions against the will of the majority. Therefore, the FFP promotes the preservation of voting procedures in the question of the naturalization of foreigners even after a federal court ruling deemed such procedures as unconstitutional. This stance has been criticized in some circles as being racist or xenophobic.

The FFP is a proponent of lower taxes and is against deficit spending. This has placed them in a dilemma in terms of its agricultural policy since, in consideration of it being the most popular party among northern Faelish farmers, it cannot reduce existing agricultural subsidies or curtail the current system of direct payments to farmers. That said, the party also largely discredits corporate bailouts as well.

In social welfare policy the FFP rejects expansion of the welfare state, and promotes a conservative society. It opposes the public financing of maternity leave and post-natal care. Perhaps its most compromising stance is its scepticism toward governmental support of equalization of both genders, thus the FFP has the smallest proportion of women among parties represented in the halls of the sates. In addition, the FFP has a reactionary drug policy, and seeks to reverse the legalization of the consumption of drugs such as cannabis. In its education policy, it opposes tendencies to shift the responsibility of the upbringing of children from families to public institutions (although this is often seen as hyperbolic). The party claims that there's an excessive influence of anti-authoritarian ideas originating from the protests of 1968. In general, the party supports strengthening crime prevention measures against social crimes and, especially in the areas of social welfare policy and education policy, a return to meritocracy. However this meritocracy has not been defined in any existing literature to date.