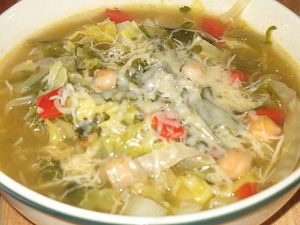 Faelish cuisine is an umbrella term referring to the specific set of cooking traditions and practices associated with the Faelish people. The native cuisine was traditionally simple fare made with quality local ingredients, matched with simple sauces to accentuate flavor, rather than disguise it. However, Faelish cuisine has absorbed many cultural influences of those that have settled around the coasts, producing hybrid cuisines and regional varieties totally unique in lineage, ingredients, and styles from what might be considered the traditional food.

Vilified as being British or Irish in flavor, Faelish cuisine was traditionally limited in its international recognition. However, ancient Çelathi agriculture and animal breeding produced a wide variety of foodstuffs for indigenous Faels. Late Roman and Medieval Faeland developed meat and savory herb stewing techniques.

In common with many advanced economies, rapid urbanization and the early industrialization of food production as well as female emancipation have resulted in a highly modern consumer society with reduced connection to the rural environment and adherence to traditional household roles. Consequently food security became an increasing concern starting in the 1960's. Concerns over the quality and nutritional value of industrialized food production led to the creation of the Roots Association in 1951. Its principles of organic farming are now widely promoted and accepted as an essential element of contemporary food culture by many sections of the population (often upheld as a symbol of the nation, in fact), and animal welfare in farming is amongst the most advanced in the world. The last half of the 20th century saw an increase in the availability of a greater range of good quality, organically-produced fresh products and greater willingness by many sections of the Faelish population to vary their diets and explore dishes from other cultures on the island. Current trends suggests a growing national cuisine created from the regional variants. 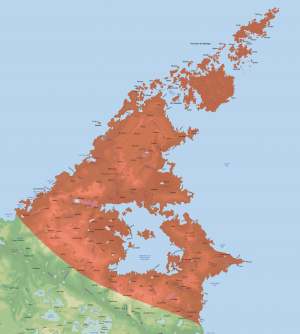 The Latin Coast is known for its affinity for pastas served simply (an appropriation from the 19th-century immigration from Sardinia), typically with 2-3 other ingredients. Potato is a common replacement for traditional cereals, such as spelt. The most common forms of protein consumed are traditionally fish, cheese, beans and legumes. Mushrooms often feature prominently in settlements in the mountains.

Seafood is a major staple of Atlantic cuisine, the Coast variety being no exception, as the sea has been part of the region's culture since its beginning. Vegetables, especially beans, are important in Coastal cooking and many imported crops (fennel, garlic, chickpeas) also feature prominently despite not being native to the area.

Valaduria is known for its hearty and simple rustic fare. Typically consisting of a meat or fish served with little ornament, often roasted or grilled with a lightly herbed, seasonal vegetable, potatoes and sea salt.

Main article: Cuisine of the Midlands

Faelish cuisine, or the cuisine of the Midlands, is a style of cooking originating from central Faeland (Ríocht Fíl) and developed by the native Faelish population. Although it reflects much social and agricultural change, it is largely representative of the indigenous crops and meats available to the inhabitants.

Main article: Cuisine of The Shore

The cuisine of The Shore originated in the southeastern region of the V.F. roughly contiguous with Lito. It is characterized by extensive use of seafood and ovine products, which results from its historical reliance on its seaports and fishing industry, as well as pastoral farming in the rocky, inland regions. Many of The Shore's earliest settlers were Catholic exiles from Elizabethan England, who brought their traditions with them (including baking foods, whereas sautéing was more typical of the rest of Faeland).

A twentieth-century phenomenon of gastronomical societies —food clubs where men and women gather to cook and enjoy their own food— has become very popular, inspired by a similar Basque tradition.