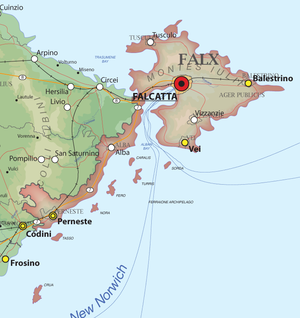 Falx, the only country using Falcens as a national language.

Falcens is an East Vallonic language, thus related to and classified as a substratum of Vallo and, ultimately, Latin. It is one of Faeland's major languages and the most widely spoken first language in Falcatta. Globally, Falcens is spoken by approximately 500,000 native speakers and also by about the same number again as a second language, principally in Vhallonesea. Standard Falcens is widely taught in schools and universities in the republic alongside Latin.

The history of the language begins with the East Vallo consonant shift during the period following Roman evacuation, separating Ancient Vallo dialects from Classical Latin. The earliest testimonies of Ancient Vallo are from scattered inscriptions and manuscripts, especially in Late Latin or early Medieval Latin, from the 5th century CE. Old Falcens at this time belongs to the Vallo-Roman cultural sphere, and would eventually fall under Brittanic rather than Vallo influence during the early sub-Roman period.

As the Pentapolis was divided into many different polities, the only force working for a unification or standardization of "Vallo" during this period of several hundred years was the general preference of writers trying to write in a way that could be understood in the largest possible area; which is to say that most attempted to follow Latin guidelines wherever possible. 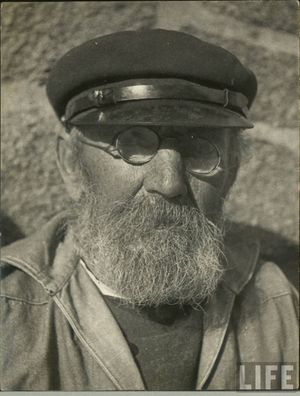 When Xaius Caesis translated his Historia Romanorum in 1502, he based his translation mainly on the bureaucratic standard language used in Falcatta (Latina Falcatta, Latin from the city of Falx). This language was based on Eastern Upper and Eastern Central Vallo dialects and preserved much of the grammatical system of Middle High Vallo (unlike the spoken Vallo dialects in Central and West Pentapoli, which already at that time began to lose certain features). In the beginning, copies of the History had a long list for each region, which translated words unknown in the region into the regional dialects. Latinists rejected Caesis' translation in the beginning as debasing; however, it did much to reverse several trends that would otherwise have distanced the language yet further from its roots. It took until the middle of the 17th century to create a standard Falcens that was widely accepted, thus ending the period of Early New High Falcens.

Until about 1800, standard Falcens was almost exclusively a written language. At this time, people in rural southern Falx, who spoke dialects very different from Standard Falcens, learned it almost like a foreign language and tried to pronounce it as closely to the spelling as possible. Prescriptive pronunciation guides used to consider northern Falcens pronunciation to be the standard. However, the actual pronunciation of Standard Falcens varies from city to city.

Falcens was the language of commerce and government in the period of the Marine Empire, which encompassed a large area of northeast coastal Faeland and the Ferraione Archipelago. Until the mid-19th century it was essentially the language of townspeople throughout most of the Empire. It indicated that the speaker was a merchant or seaman, an urbanite, not their nationality. Some foreign cities, such as Nantes ("Namneto" in Falcens) and Bourdeaux ("Burdixala" in Falcens) in France, show signs of a growing Falcens-speaking population at that time.

Media and written works are now almost all produced in Standard Falcens (often called Altfalx in Falcens, lit. "High-Falx") which is understood in all areas where Falcens is spoken.

The first dictionary of the Sistren Ennae, the dozen volumes of which were issued between 1819 and 1831, remains the most comprehensive guide to the words of the Falcens (and to a large extent Vallo) language. In 1860, grammatical and orthographic rules first appeared in the Drusus Handbook, often called simply "The Grammar". In 1901, this was declared the standard definition of the Falcens language. Official revisions of some of these rules were not issued until 1958, when the Falcens spelling reform of 1958 was officially promulgated by governmental representatives.

This spelling reform has caused heated debate among the literary community, with some hailing it as a "traditional" move to realign with Latin root-words, while others claim it derails the Vallonic language tendency to spell strictly phonetically. As the spellings return to Latinate origins, often the popular pronunciation remains, creating a phonetic-orthographic rift.

Standard Falcens originated not as a traditional dialect of a specific region, but as a written language codified and derived from the language spoken in Falcatta. However, there are a select few places where the traditional regional dialects have been replaced by standard Falcens; this is the case in many neighborhoods populated by foreigners within the republic, and also in major towns in other parts of the country.

Standard Falcens differs regionally in vocabulary and some instances of pronunciation, and even grammar and orthography. This variation must not be confused with the variation of local dialects. Even though the regional varieties of standard Falcens are only to a certain degree influenced by the local dialects, they are very distinct. Falcens is thus considered a pluricentric language.

In most regions, the speakers use a continuum of mixtures from more dialectal varieties to more standard varieties according to situation.

Standard Falcens is the only official language in Falx alongside Latin; it shares semi-official status in the Pentapoli (with Vallo and Latin).

Falcens has an officially recognized status as regional or auxiliary language in Ríocht Fíl and New Norwich.

Falcens is not one of the 23 official languages of the European Union although one can send and receive correspondence in it. It is the language with the largest number of native speakers in the Respublica Falciana, and, just behind English, Vallo, and Faelish, the fourth-most spoken language in Faeland.

Falcens is a member of the eastern branch of the East Vallonic family of languages, which in turn is part of the Vallo language family. The Falcens dialect continuum is traditionally divided most broadly into High Falcens (urban), Low Falcens (rural), and Marine Falcens (insular).

Middle Low Falcens was the lingua franca of the Vetial. It was the predominant language along the northeast coast. This changed in the 16th century, when the Historia was printed. This translation is considered to be an important step towards the evolution of the Early New High Falcens. It aimed to be understandable to a broad audience and was based mainly on Central and Upper Falcens varieties. The Early New High Falcens language gained more prestige than Low Falcens and became the language of science and literature. Other factors were that around the same time, the league of islands lost its importance as new trade routes to Asia and the Americas were established, and that the most powerful Falcens towns of that period were located in Middle and Northern Falx.

High Falcens is divided into Urban Falcens and Highlands Falcens. Modern Standard Falcens is mostly based on Urban Falcens, but it should be noted that the commonalities have drifted since the original construction of the language. The every day speech of the city's people has much slang, loan-words, and global influence (mostly restricted to vocabulary).

Most Falcens vocabulary is derived from the Vallonic branch of the Romance language family, although there are significant minorities of words derived from Çelathi and Breton, a very few from French and most recently, English. At the same time, the effectiveness of the Falcens language in forming equivalents for foreign words from its inherited Latin stem repertory is great. Thus, Nestor Laborius was able to translate Aristotelian treatises in pure (Old High) Falcens in the decades after the year 1000.

Even today, many low-key non-academic movements try to promote the substitution of virtually all foreign words with ancient, dialectal, or neologous German alternatives. It is claimed that this would also help in spreading modern or scientific notions among the less educated, and thus democratize public life, too.

The modern Falcens scientific vocabulary has nine million words and word groups (based on the analysis of 35 million sentences of a central library in Falcatta, which as of July 2003 included 300 million words in total).

Falcens is written in the Latin alphabet with some modifications. Some letters have been omitted and others modified to provide for different pronunciations.

Written texts in Falcens are easily recognizable as such by distinguishing features such as ł (L with stroke, used for a soft l) and more occurrences of the letter "X", which has replaced "G". The letters G,J,K, and W never appear, and Y and Z are very rare.