From Anglo-American Cyclopaedia
(Redirected from Falx)
Jump to: navigation, search

Republica Falcatta (Falcattan Republic), sometimes called Falx or simply Falcatta, is a foral state of Faeland. Its population is over half a million. Having been for a long period in history a land of mass emigration, the republic is today one of the greatest immigrant-receiving states in the country, with 31,600 foreigners (9.30% of the regional population) in 2008, the most recent of which are Faels and New Norwichers.

The Falcatta Republic (often referred to as simply Falcatta) occupies a portion of the Margoreci Peninsula (a part of the larger Falcatta Peninsula) and shares a single, continuous border with Vhallonesia which runs north-south along the ridges of the Montes Xhulii and then eastward along the River Lhemine.

The area occupied by the modern state had been for more than a millennium an independent polity, known as Falcatta, a metonym for the territory controlled by the city-state's republic, and the region was annexed to Fáel in 1925 after expulsion of the British. Its capital was and still is Sânts-Nemhora, which for a long period ruled one of the vastest and richest maritime republics and trade empires in the Atlantic. Due to this recent annexation to the rest of Faeland, a significant number of Falcattans consider themselves to have a unique identity which they refuse to subsume within the notion of "Faelish" (rooted in a deeper distinction Falcattans make from themselves and other inhabitants of the Latin Coast, see Roman Syzygia), and the state government has gone so far as to officially define its inhabitants as "a people". This opened the way to a notable nationalist movement and to the election of right-wing Consuls in recent years.

Once the heartland of a vibrant city-state, Falcatta is today among the wealthiest, most developed and urbanized parts of Faeland. Having one of the country's richest historical, natural, artistic, cultural, musical and culinary heritages, it is also the most visited region of Faeland, with about 20 million tourists every year. Besides Falcens, most inhabitants also speak Vallo.

The territory lies on the north-eastern coast of the of the island in the Bay of Biscay Sea and is approximately 150 miles from the coast of western France. "Falcatta," as it is often called, consists of the city of Sânts-Nemhora and a surrounding spit of land (the scythe-shaped peninsula from which the republic gets its name). The city is counted among the Latin cities of the coast - the Pentapolis - but remained independent when the cities unified following independence in 1925.

Falcatta is a unitary republican city-state. Although there is historical precedent for this, it is largely a result of independence from Britain. Prior to this, the city was nominally under various masters but locally ruled by an urban council, magistrates, and various officials. The Famous Families of Sânts-Nemhora have administered the city for centuries, but are not guaranteed this status at law. Needless to say, tradition plays a large role in the governance of the city, and the common citizen is very interested and active in politics. As well as being an independent state, Falcatta also hosts several offices of the General Government of the Faelish Confederation.

Falcatta can be divided into four areas: the northern alpine zone, the hill zone, the lower plains and the coastal territory.

By area 49% of its surface is mountainous (regions). The prealps are not as high and range between 700 m (2,300 ft) and 2,200 m (7,200 ft). A distinctive characteristic of the re-alps are the cave formations, including chasms and sink holes; the , situated in the chain in the province of , has an explored depth of 985 m (3,232 ft), being the deepest cave in Faeland. Fossil deposits are also abundant there.

The River Valley covers 17% of Falcatta. This valley consists of a plain extending from the mountains to the Alban Sea, broken only by some low hills: , which constitute the remaining part of the territory. The plain itself is subdivided into the higher plain (gravel-strewn and not very fertile) and the lower plain (rich in water sources and arable terrain). The lower plain is both a mainstay of agricultural production and the most populated part of the region.

The coasts of the Alban Bay are characterized by a flat terrain with ponds, marshes and islands. The Delta to the north features sandbars and dunes along the coastline. The inland portion contains cultivable land recently reclaimed by a system of canals and dikes. Fish ponds have been created there as well. The delta and the lagoon are a stopping-point for migratory birds.

The climate changes significantly between one area to another. Continental on the plains, the climate is milder along the coast, around the Bay and in the hilly areas. The lowlands are often covered by thick fog. Precipitations are scarce (750 mm. /year) next to the River, more abundant (750-1,100 mm./year) at higher altitudes; the highest values (up to 3,200 mm./year) are recorded in the prealps, near and on the plateau.

Main Articles: History of the Republica Falcatta, History of Falcatta

Although claiming a majestic and long history tracing back to the 1st century B.C.E., The Falcattan Republic was only officially established after independence from Great Britain in 1925. Following a peaceful interim period, the formal adoption of a constitution occurred in 1927. In 1935, the city-state willingly joined the Faelish Confederation.

Between the 2nd and 1st millennium BCE, the region was inhabited by the Gnaghi culture. According to ancient historians, who perhaps wanted to link Falcattan origins to the legend of Roman origins in Troy, the local Faelish tribes (The Velatici, the Trasventi, and the Lithones) came from Anatolia at the time of the Fall of Troy, led by prince Fenetor, a comrade of Aeneas. In the 7th-6th centuries BCE the local populations of Falcatta entered into contact with the Gauls and to a limited extent the Greeks. Faelish culture in Falcatta reached a highpoint during the 4th century BCE. These ancient Falcians spoke a dialect of Çelathi, an Indo-European language akin to, but distinct from Celtic and the other related languages. Meanwhile, the Falcians prospered through their trade in amber and were well-known for their breeding of horses. The river valley became the center of Falcian culture. However, over time, the Falcians began to adopt the dress and certain other customs of their Celtic neighbors.

Following the Claudian Invasion, the region of Falcatta was part of the larger Roman province.

During the invasion, Sânts-Nemhora became one of the first Roman colonies established early in the conquest. The city of Sânts-Nemhora (Lat. colonia Augusta Falcata) and the region of Falcatta were united in this period under a system known as the civitas.

In 181 CE, a Roman triumvirate of local military commanders Publius Vasica, Caius Laminius, and Lucius Manlius Aquila led three thousand families, mainly from Gaul but supplemented by native Faels, to found a Latin colony at La Sammia as a base to protect the territory of the province from incursions of the hostile Drossi and Aravanni. From then on, Roman influence over the area increased. Thus, in 198 CE more colonizing families were sent from Falcata (modern Sânts-Nemhora) to the mountain regions along the border. In 98 CE the Via Claudia was completed connecting Falcata to Fhužin. In 131 CE, the Via Vera joined Martžu to Falcata. In ##, together with the rest of Maritima, Falcata and her daughter cities were granted partial rights of Roman citizenship according to the Lex Pompeia Transatlanticus. Thus, by the end of the 2nd century CE Latin had finally displaced the original Falcatan Faelish language.

Following the collapse of Roman rule, the Franks had assumed political control of the European continent nearest to Faeland. Falcatta was dominated by a refugee from this continental power shift: Syagrius II. Though politically dominant, the wars of Syagrius left Falcatta with enemies at home but little lasting military might.

The legend of Syagrius was gradually absorbed into Falcattan lore over the centuries. In the late 800s, Pethicus, Decurio of the March of Alba, was elected Duke of Falcatta. Under his turbulent rule, the marches were absorbed into the territory of Falcatta such that its territory contained a large portion of the Margoreci Peninsula. In the 10th century, the mainland of Pentapolis, after suffering infighting, was unprepared to challenge Falcatta's imperial ambitions. Gradually, the communes of the mainland grew in power and wealth. A treaty in 1183 confirmed the Peace of Falcatta which was declared in 1177 in which the cities agreed to remain part of the "Duchy" as long as their jurisdiction over their own territories was not infringed upon. The league was dissolved at the death of Duke ___ in 1250. This period also witnessed the founding of the second oldest university in Faeland, the University of Martžu founded in 1222. It is from this time that the common name for the city -"Holy Groves"- first comes into use on historical documents. 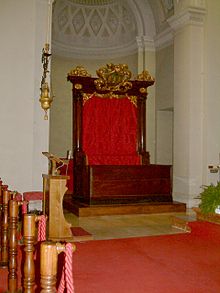 Throne of the Dukes of Falcatta.

The Falcian Republic is a constitutional republic. Following independence in 1925, the Senate assumed the role of a provisional government while the relationship with the sister cities of the Pentapolis was determined. The city voted to remain apart from the Federation of the Latin Coast, and the Senate elected a board of ten scholars to draft a constitution for the city.

The city had a longstanding unwritten constitution it could trace back to ancient times, and the decemvirs opted to formalize and streamline all traditions and precedents to date. Custom no longer has weight of law unless legislated.

When the borders were established, the countryside was largely stripped of its right to self government, and the administration became unitary, with all power devolving from the city of Sânts-Nemhora.

Unlike most modern Republics, the lines between executive, legislative, and judicial authority are not sharply drawn. Many duties overlap or in some cases extend only to certain jurisdictions. In more than one case, elected chambers and even citizen assemblies can act as final courts of appeal (depending the issue to be determined).

Like Faeland of which it is a part, Falcatta has brought the entirety of government business online. For a time, the legislative assemblies of the state were waning in popularity (cf. low attendance), but the internet has brought ease of access and streamlined operation to the business of the popular bodies, increasing participation to nearly 100%.

Although called a legislative branch, many of the laws introduced in the various bodies are brought by members of what would otherwise be called the executive branch.

According to interpretation of the constitution, all citizens are in effect legislators of the country. The entire population is called for vote (limited by eligibility requirements: age, citizen status, etc.) in various organizational methods to vote on various subjects and elect magistrates. The different formations have different responsibilities and provinces. 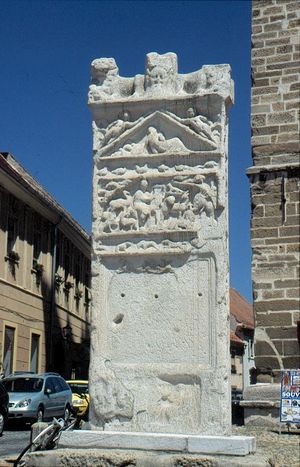